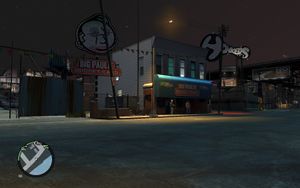 Big Paulie Budget Cars is a car dealership in Grand Theft Auto IV. It is located on Emery St. & Anvil Ave in Tudor, Alderney, opposite the Honkers strip club. Although the dealership looks disused, there are commercials for the business on the in-game television, showing that the dealership sells beat-up/wrecked vehicles for extremely high prices. However, only random cars spawn in the yard. Despite this being what appears to be a car dealership, the game does not consider it one, instead just as an ordinary car park. This is because every other established car dealer in the game has a feature where any car taken from the lot gains the player a one star wanted level, even if it is the players own car, or there are no police around. This does not happen at Big Paulie Budget Cars.