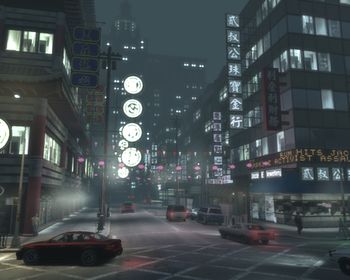 Chinatown in GTA IV, as viewed to the west from the Albany Ave-Diamond St intersection.

Chinatown is a neighborhood in southern Algonquin, Liberty City, in Grand Theft Auto IV and Grand Theft Auto: Chinatown Wars. It is bordered to the north by Emerald Street (Lower Easton), to the west by Columbus Avenue (City Hall), to the south by Calcium Street (The Exchange), and to the east halfway between Borlock Road and Albany Avenue (Fishmarket South).

Chinatown is a residential and commercial neighborhood, Chinese descents and immigrants Tongs as residents, business owners and activity. It's a working class ethnic enclave, serving as a stark contrast to the busy nature of surrounding City Hall and The Exchange.

The district features a significant number of narrow streets, and a mixture of small tenement buildings and large low-rise office buildings and shops, some decorated with Oriental or modernist designs. The district is also uniquely adorned with large, overhanging signs reminiscent of those seen in the streets of Hong Kong, despite this practice not being commonly seen in New York City's Chinatown (which signs do not usually extend too far past the edge of sidewalks). The businesses in the neighborhood are Chinese-owned and are tailored specifically for Chinese only. The district is the main territory of the Algonquin Triads in both GTA IV and GTA Chinatown Wars.

The Liberty City Subway system serves Chinatown. The Emerald station, located on Emerald Street between Luddite Row and Albany Avenue along the neighborhood's border with Lower Easton, is served at all times by the Algonquin Outer Line.

Most of the people are Chinese in ethncity. The spoken lagnuages are Cantonese Chinese and English as it appears in the game. Other things in this topic are unknown.

When originally featured in GTA IV, Chinatown boasts only one useful facility, an underground weapons shop is located across the street from the intersection of Cavity Lane and Bismarck Avenue.

Other landmarks in the district were also featuring over the course of GTA IV's storyline, particularly during "Three Leaf Clover", when Niko Bellic assists Patrick McReary and his peers in robbing the main Bank of Liberty branch in The Exchange/Chinatown and escaping along the narrow alleyways of the district to escape into Emerald station.

The "Dragon Heart Plaza" is a mixed-use office building and shopping center in Chinatown which interior was added for both The Lost and Damned and The Ballad of Gay Tony. In The Lost and Damned, Johnny Klebitz and Jim Fitzgerald attempted to sell the heroin that they stole during "Action/Reaction" back to the Algonquin Triads; the Triads shoot at Johnny and Jim, as they fight their way out of the roof of the Dragon Heart Plaza. In The Ballad of Gay Tony, Luis Fernando Lopez and Anthony Prince must fight their way down from the upper floor of the building's interior against an army of Algonquin Triad members in "Chinese Takeout".

An Al Dente's restaurant may also be found at Albany Avenue and Calcium Street.

When requested for Stevie's Car Thefts, a Super GT can be found parked across the street from the 69 Exchange.

Retrieved from ‘https://www.grandtheftwiki.com/index.php?title=Chinatown,_Algonquin&oldid=368140’
Category:
Cookies help us deliver our services. By using our services, you agree to our use of cookies.