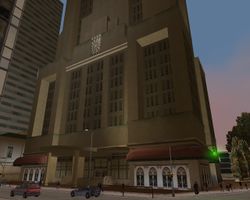 The ornate base of the building in GTA III.

Unlike the Empire State Building, the GTA equivalent is only similar in design by its tapering profile, but otherwise features a completely different facade design and appears much thinner, like an obelisk; the only hint of the building's Art Deco styling (a feature very prominent on the Empire State Building), is only vague present on the street level entrance of the building.

Retrieved from ‘https://www.grandtheftwiki.com/index.php?title=Empire_State_Building_in_GTA_III_Era&oldid=351056’
Categories:
Cookies help us deliver our services. By using our services, you agree to our use of cookies.