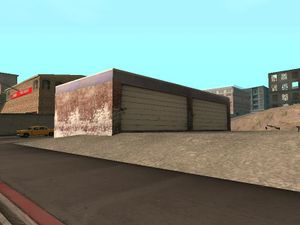 A vehicle save garage in Doherty, San Fierro

There are several types of vehicle garages in Grand Theft Auto games.

The first type is a garage for storing vehicles, almost exclusively attached to a safehouse, or located near one. In Grand Theft Auto: San Andreas, a maximum of four vehicles will be saved in any of the garages though fewer or more may actually fit inside, depending on the size of the garage as well as the vehicle. A variation on this is the large hangar at the Verdant Meadows airstrip, in which larger vehicles including planes can be stored. In Grand Theft Auto IV, garages were replaced with parking spaces outlined in yellow outside any safehouse marked with 'Residents Parking Only'. Though more may fit inside the outline, these spaces will save up to two vehicles. Generally, vehicles parked within the space will become dirty, probably from dirt or such kicked up by traffic passing by, or clean, after rainy weather, other vehicles kept in spots that haven't been driven a while will stay dirty until rain comes. At random times, most stored vehicles will spawn dirty, or clean. There is also a risk that traffic might collide with the vehicles (though this only happens when the parking space is still near the player); although any damage to the vehicle is repaired when the parking spot spawns again, if the vehicle is pushed out of the parking spot - and the player doesn't notice and reparks it - the vehicle will be lost.

The second type is a public vehicle repair business. Pay 'n' Spray garages exist in all GTA III Era cities and in GTA IV, and will repair any non-public vehicle, as well as repainting it and replacing the engine to remove wanted levels.

The third type is a customization shop. TransFender, Loco Low Co., and Wheel Arch Angels are the public garages in Grand Theft Auto: San Andreas from which car modifications can be purchased, such as wheels, nitrous, or hydraulics.

Garages like the 8-Ball Autos in all GTA III Era games and Welding & Weddings in GTA San Andreas allow you to attach a bomb to a car, and to blow up it later if necessary. Sometimes their services will be required for specific missions, in other times, they can be useful or they can be for fun.

Garages of the given type accept vehicles from the certain list for a payment. Examples are Import/Export garages in Grand Theft Auto III and Sunshine Autos Import Garage in Grand Theft Auto: Vice City. Once the list is finished, cars from it become available for purchasing in garage or other bonuses appears.

Some garages are only available during particular missions, and will not be accessible otherwise. In GTA IV some houses have working garages - for instance, the double-wide garages in Westdyke, Alderney. These will open automatically when a car approaches and NPCs can use them for parking, but vehicles are not saved if the player leaves the area.

The southeastern-most hangar at Las Venturas Airport is only used for spawning the AT-400 passenger plane.