There are several stories in Liberty City. This one changes everything. Once a trusted wise guy in the Leone Family, Toni Cipriani was forced into hiding after killing a made man. Now he's back and it's time for things to be put right.

The streets of Liberty City are in turmoil. Warring mafiosi vie for control as the town begins to self-destruct under waves of political corruption, organized crime, drug trafficking and union strikes. No one can be trusted as Toni tries to clean up the mess of the city's chaotic underworld. Deranged hit men, morally depraved tycoons, cynical politicians and his own mother stand in his way as Toni tries to bring the city under Leone control.

Forced to fight for his life in an odyssey that will shake Liberty City to its foundations, Toni must use any means necessary to secure his place in the leadership of the Leone family in a town up for grabs. 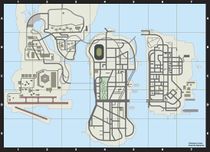 At this earlier time in the GTA lineage, Liberty City is slightly different. For example, Luigi Goterelli's Sex Club Seven is named Paulie's Revue Bar, and is instead owned by Joseph Daniel O'Toole, a pervert working for the Sindacco Family (from Grand Theft Auto: San Andreas), although the player sees how it later becomes Sex Club Seven. There is also a Little Italy section of town that does not exist in the Liberty City from GTA III, although its fate is explained in this game. Even the tallest tower in Liberty City in 1998 is only half of its height is compared to GTA III. The way to get from island to island has also been tweaked. A ferry now runs from Portland Island to Staunton Island, and the tunnel that connects the islands in GTA III has not yet been completed - only the section of the tunnel that runs from north Shoreside Vale to south Shoreside Vale is open. The Callahan Bridge (the bridge that was blown up in Grand Theft Auto III) has also not been fully constructed yet. Only after the mission "Driving Mr. Leone", which occurs at around 19% completion, you can actually traverse the bridge as its construction progresses. In addition, motorbikes were previously permitted in the city. The official Liberty City Stories websites reveal that motorbikes were no longer in GTA III due to a public ordinance that banned them that was supported by the Maibatsu Corporation (which marketed the oversized Maibatsu Monstrosity in GTA III) in order to promote the use of automobiles in the city.

File:Controls-GTALCS-psp-menu.png
Control menu of GTA LCS in the PSP version.

An example of multiplayer options menu of GTA LCS in the psp version.

File:GTALCS-AudioMenu.jpg
When the option Custom Tracks is not enabled, appear not available..

A special feature (only in the PSP version of the game) is the ability to listen to custom soundtracks. Previously, only Grand Theft Auto games on the Xbox and PC were able to implement custom soundtracks. When Liberty City Stories was released, the custom soundtracks option was featured in the "Audio" section of the menu (by pressing Start in gameplay) but did not have any use. Many people posted on various internet forums asking how to use the feature. At one time, it was thought that these custom soundtrack abilities had to be unlocked, but this would have been very unusual since previous games didn't do this.