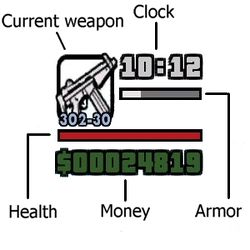 Illustrated example of a HUD as seen in GTA San Andreas.

A heads-up display, often abbreviated as HUD, is a set of indicators used in most games to show the player's current status in a game, such as the score, health and the like.

A HUD can be used to convey many different types of information, such as time, score, money, health, armor, weaponry, ammunition, warnings (eg "wrong way" in a race), maps with blips, and subtitles of conversations.

The HUD in GTA games may display the following information:

Other elements appear on the HUD in other situations, such as a dialogue subtitles, help messages, and a "Busted" or "Wasted" sign if the player gets arrested or killed respectively.

Retrieved from ‘https://www.grandtheftwiki.com/index.php?title=Heads-Up_Display&oldid=415523’
Categories:
Cookies help us deliver our services. By using our services, you agree to our use of cookies.