Difference between revisions of "Hunting" 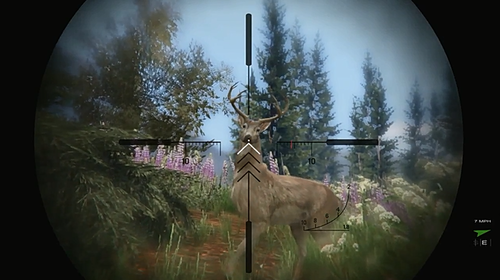 An elk in the cross hairs of a sniper rifle while hunting in a pre-release screenshot.

Hunting is a side mission and feature in Grand Theft Auto V available to Trevor Philips from the Chiliad Mountain State Wilderness in Blaine County after completing the "Fair Game" mission for Cletus Ewing and only between sunrise and sunset. After arriving at the Journey in Chiliad Mountain State Wilderness, Trevor will be equipped with the animal call device given to him by Cletus during Fair Game, will be given unlimited ammunition for a sniper rifle, a Blazer to move around the area and camouflage clothing.

The player can locate animals in the area by using the animal call with dots appearing on the radar to show their location. A red circle will appear around the dot, which is the area where the animals will spot Trevor and run away. The player must also remain downwind of animals to avoid being smelt, which also results in the animals running away. Toward sunset, Trevor will receive a text message from Cletus warning him of the time and will receive a futher text message at sunset. After killing an animal, the player must photograph the animal and text the image to Cletus who will give different amounts of money depending on the type of animal and type of wound with headshots, neck shots and heart shots earn the most money. Cougars appear more frequently while hunting and can be seen as a dot on the radar and, if allowed to approach Trevor will kill him unless using Trevor's special ability, which allows him to survive the attack and kill the cougar afterwards.

The monetary reward listed below is the maximum amount the player can earn for each kill. The weapon used, however, also effects the reward.

The monetary reward, however, is also dependent on the weapon used.