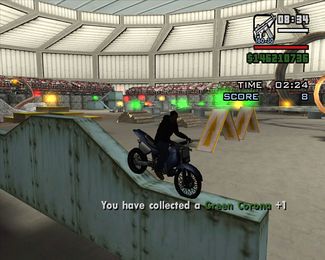 Kickstart is a checkpoint side-mission in Grand Theft Auto: San Andreas, one of the two events held at Blackfield Stadium in Blackfield, Las Venturas, and available on any day of the week except Monday and Wednesday. The event is similar to Grand Theft Auto: Vice City's Dirtring event in many respects, with several modifications.

The side-quest tasks the player in score as many points as possible using a Sanchez dirt bike by reaching colored checkpoints (also known as "Coronas" in the game) all over the arena, all within a four-minute time limit.

Like Dirtring, the Coronas tend to be located in hard-to-reach places, primarily elevated locations connected via thin ledges, rocky or bumpy obstacles, ramps, and a loop-the-loop. Unlike Dirtring, however, the Coronas appear in different colors, each with varying numbers of points and degrees of difficulty to reach them. They include:

Completion of Kickstart for the first time is required for completion in GTA San Andreas.

The monetary reward depends on the score that the player has received, for example, if you score 32 points will receive $ 3,200 and so on. Also, once the player passes the side-mission the first time, a Dune will spawn in front of the Blackfield Stadium's entrance.

Retrieved from ‘https://www.grandtheftwiki.com/index.php?title=Kickstart&oldid=413290’
Categories:
Cookies help us deliver our services. By using our services, you agree to our use of cookies.