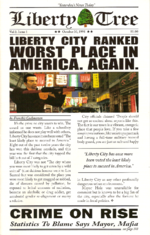 The respective article on the Liberty Tree.

Liberty City Ranked Worst Place in America. Again. is an article in the October 30, 1998 edition of the Liberty Tree by Frenchie Cockmaven.

It's the prize no city wants to win. The award no one wants. Like a schoolboy informed he does not play well with others, Liberty City has one more been voted "The least likely to Succeed in America." Eight out of the past twelve years the city has won the dubious accolade, and this year was the first that the city topped the bill in 6 out of 7 categories.

Liberty City was not "The city where you were most likely to get eaten by a wild animal" (that dubious honor went to Los Santos) but was concidered the place you were most likely to get mugged or robbed, die of diseases caused by pollution, be exposed to lethal amounts of radiation, become an alcoholic or drug addict, get accidental gender re-alignment or marry a relative.

City officals claimed "People should not get so excited about reports like this. The fact is our town is a vibrant, energetic place that people love. If you take a few simple precautions, like wearing a gasmask and having a full-time miltary trained body guard, you are safe and happy in Liberty City as any other profoundly dangerous urban enviorment."

Mayor Hole was unavailable for comment but is known to be a big fan of the city, especially after the fortune he made in local politics