Difference between revisions of "Liesdamnlies.net" 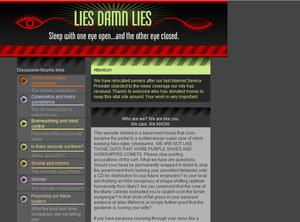 The home page of Liesdamnlies.net in GTA IV.

Liesdamnlies.net is a website accessible in Grand Theft Auto IV, The Lost and Damned, and The Ballad of Gay Tony. The site is mainly about conspiracy theories. The websites may be a reference to the UFO myth in GTA San Andreas as a link to Area53site.com can be found at the bottom of the page. Oleg Minkov has the site as a computer background which reads "the all seeing eye is watching you, accompanied by the infamous Eye of Providence and pyramid. The website also has numerous forums such as:

World domination conspiracies - The mullet connection!
Cybernetics and mass surveillance - The All Seeing Eye is watching you...
Brainwashing and mind control - Planning notes so you will know.
Is there anybody out there? - Aliens, and UFO's.
Smoke and mirrors - The truth about Pluto.
Women - The ultimate conspirators?
Poisoning out future leaders - What the food and companies are not telling you! 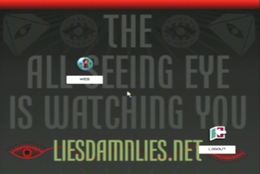 There are also various members of the site who have participated in discussion forums. It should be noted that some of these usernames are based off of real-life conspiracy theories.

Retrieved from ‘https://www.grandtheftwiki.com/index.php?title=Liesdamnlies.net&oldid=374387’
Category:
Cookies help us deliver our services. By using our services, you agree to our use of cookies.