The Los Santos Transit Metro is a rapid transit system serving the majority of the urbanised Los Santos neighbourhoods in GTA V. It is strongly based on the Los Angeles County Metro Rail and is owned by the Los Santos Transit Authority. The network consists of one route which serves 11 stations; 7 below surface level and 4 above ground. The official slogan is 'Catch the Arrow'. 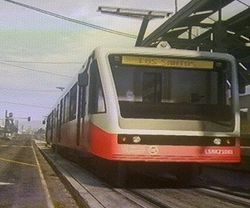 The train stock features two walk-through carriages and singular doors. The whole of the system uses overhead rails to provide electrical power to the trains. The player can roam around inside the cars while the train is idle and at a station. The trains are manually driven though unable to be obtained by the player.