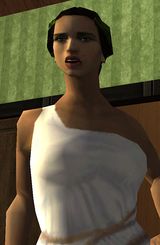 Maria as a waitress at Caligula's Palace, Las Venturas.

Maria Latore was born in an unknown location, quite possibly in San Andreas, and later moved to Las Venturas to become a waitress at the Sindacco Family run Caligula's Palace casino. Later, after the Leone and Forelli families invested money into the casino, she met Salvatore Leone and started a relationship with him. At some point between 1992 and 1998, she married Salvatore and moved into his home in Liberty City, before getting her own apartment in the same neighbourhood.

In 1998 Maria and Salvatore's marriage was at rock bottom, with both of them not living together and Maria becoming addicted to drugs. She had also begun cheating on Salvatore with Biker leader Cedric "Wayne" Fotheringay, something that Salvatore was well aware of and often used in their arguments. She attempted to sell Leone Family secrets to Ned Burner through e-mails, although the two never reached an agreement on a price. Toni Cipriani was then assigned to chaperone her, something that often resulted in him rescuing her from trouble, including: helping her after she shoplifted three local stores, 'winning' her in a street race, killing her abusive boyfriend, and saving her life after a drug overdose. During this period, she expressed a romantic interest towards Toni (who avoided her advances), an interest that ended when Maria realized that he had no money.

In 2001, her relationship with Salvatore remains at rock bottom, but the two are seemingly living together again. She is introduced to Claude, who she calls "Fido", through Salvatore, who asks him to chaperone her for an evening, something that results in Maria forcing Claude to take her to her dealer, and afterwards being chased out of a party by the police. Maria later tells Salvatore that she and Claude began dating, and Salvatore answers that by attempting to kill Claude with a bomb-laden car. Maria, however, paged Claude and had him meet her at a small dock in Callahan Point. She then introduced him to her old friend Asuka Kasen, and the three fled to Staunton Island.

Asuka later hired Claude to kill Salvatore, resulting in Maria becoming a widow. Maria and Asuka engaged in various activities such as going on a holiday to avoid a paparazzi and shopping. Maria and Asuka eventually tortured Miguel together to extract information about the Colombian Cartels operations. Catalina, however, killed Asuka and Miguel, kidnapping Maria and taking her to Shoreside Vale, demanding Claude to pay a $500,000 ransom. Claude paid the ransom at the Cartels headquarters but was ambushed by the Cartel. Claude killed the Cartel members and followed Catalina to Cochrane Dam, destroying her helicopter with a rocket launcher and rescuing Maria. The two walked away from the scene, with Maria nervously talking while the screen fades to black, and a gunshot is heard.

Maria has a high self-esteem but low self-control, something that becomes apparent with her drug usage and spent of Salvatore's money. It should also be noted that despite Salvatore giving her money, she also shoplifts, leaving the trouble to either Salvatore or her chaperones. In addition to being a nymphomaniac, she is also very dominating, and perceives Salvatore's most trusted henchmen as lapdogs that should do her bidding, and calls them "fido" (as is the case with Claude in GTA III and Toni Cipriani in GTA Liberty City Stories). 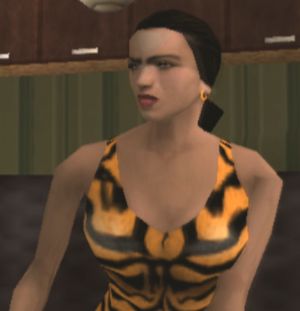