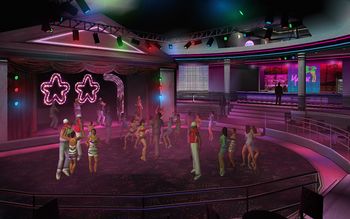 The dance floor of the Malibu Club in GTA Vice City, the first club in the series.

Exterior of the Malibu Club in GTA Vice City.

The Malibu Club in GTA Vice City is the first interactive nightclub in the series. It becomes accessible early in the game, containing a lively interior complete with an active dancefloor, a bar, and an overhead office. The club may even be purchased by Tommy Vercetti after "Shakedown", and its office used as a meeting place to stage a heist. There are also entertainers onstage, parodying the Village People.

In GTA San Andreas, clubs may be used by the player to dance with a girl, in a minigame similar in fashion to the Lowrider Challenge. The interior of clubs also comes complete with video games, and snack and drink machines. There are three clubs in GTA San Andreas: 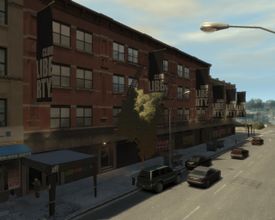 In Grand Theft Auto IV, nightclubs are not accessible and tend to be only named. Maisonette 9 in particular is occasionally mentioned in GTA IV media, while Bahama Mamas has a physical presence but is not accessible due to a temporary closure.

Nightclubs take centerstage in The Ballad of Gay Tony, with three clubs central to the game's plot:

While in Maisonette 9 or Hercules, the player can partake in dancing and taking shots of liquor. Maisonette 9 also allows the player to perform Club Management side activities, as well as engage in champagne drinking contests.

Unlike their predecessors, nightclubs in The Ballad of Gay Tony exclusively open at night, and are thus inaccessible during the day.

There is only one nightclub in GTA V, Bahama Mamas West. It is inaccessible by the player, but friends can be taken to the club during outings for drinks.

The Ballad of Gay Tony
Retrieved from ‘https://www.grandtheftwiki.com/index.php?title=Nightclub&oldid=396396’
Categories:
Cookies help us deliver our services. By using our services, you agree to our use of cookies.