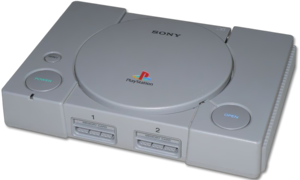 The PlayStation refers to the original Sony PlayStation console (commonly known as the PS1, PSOne or PSX) first launched in 1994/1995. The console is a fifth generation, CD-ROM-based machine capable of supporting 32-bit gaming, and was the most popular gaming consoles during the late-1990s. The console began shipping with the DualShock digital/analog controller in 1997 (replacing the original PlayStation control pad), and in 2000, a compact version of the console, the PSOne, was released.

In December 2018, Sony released the PlayStation Classic, a dedicated console containing 20 built in games; in the North American and European versions, GTA 1 is included.

Wikipedia has an article on:
PlayStation 1
Retrieved from ‘https://www.grandtheftwiki.com/index.php?title=PlayStation_1&oldid=417448’
Category:
Cookies help us deliver our services. By using our services, you agree to our use of cookies.