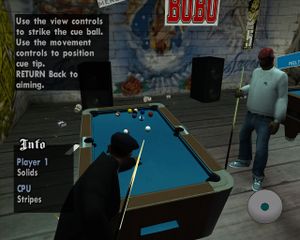 A game of pool in a bar GTA San Andreas.

In GTA San Andreas, the player can meet up a person at any bar who is holding a pool cue and challenge him. The maximum wager is $1000. The player then begins to play pool with him, and if either solid or striped balls gets into the hole, then the challenger will either get striped or solid balls. If either player accidentally pockets the wrong cue, either player will lose a turn and then the player (who didn't pocketed the wrong cue) can move the white cue into the designated cue. If the player pockets most of his colored balls, which the object tells him/her to do so, will not be able to win by pocketing the 8-Ball. If the player pockets the 8-Ball, CJ wins some money but if CJ pockets the 8-Ball before all the others, the opponent wins. If the opponent wins, CJ loses the game and the money that the player waged. If you decide to quit you get to keep the pool stick for a weapon for yourself but will loose your wager you made. It is possible to retrieve the wagered money by killing the challenger.

The player can compete against another player using a second controller, but in this case no money can be wagered.

The player wins the game on the following occasions:

The player loses the game on the following occasions:

The player/opponent loses a turn on the following occasions: 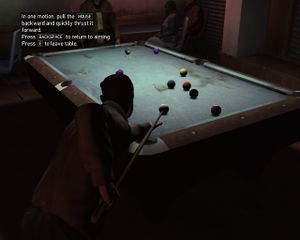 A game of pool with Little Jacob at the Homebrew Cafe in GTA IV.

Pool can be played against friends or against a competitor when not being accompanied by a friend. The player may no longer wager money. Either player will win if they have pocketed the most colors and then the 8-Ball.

As titled above, the rules are the same as in GTA San Andreas but a new foul is present if the ball jumps off the table, causing either opponents to lose a turn. Knocking the 8-Ball off will end the game, with a loss to the player who knocked it off.

As is in GTA San Andreas, the pool cue is obtainable as a weapon in The Lost and Damned after completing a round of pool

Winning a game of pool will grant the player the trophy/achievement "Pool Shark".

Wikipedia has an article on:
Eight-ball
Retrieved from ‘https://www.grandtheftwiki.com/index.php?title=Pool&oldid=379569’
Categories:
Cookies help us deliver our services. By using our services, you agree to our use of cookies.