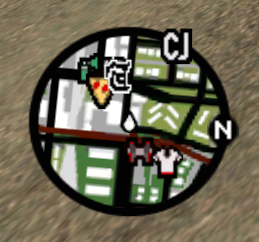 The Radar (technically a GPS), is a map on the heads-up display showing the player's current location in the game, and the relative location or direction of various points of interest.

Introduced in Grand Theft Auto III, the radar essentially replaces the player centered location compass used in preceding GTA games, and remains an element of all GTA games after.

Each rendition of the radar features a portion of a location's map within the immediate vicinity of the player, and shows various blips, representing various points of interest, such as:

Floating pickups, such as police bribes, health, armor, and weapon pickups, rampages, and hidden collectibles are not displayed on the radar even though the player can see them in the game's environment.

The radar in GTA San Andreas is also adapted to support flight. When the player operates a helicopter or freefalls with a parachute, an altitude indicator will appear to the left of the radar showing the player's height from sea level. Additionally, if the player controls a fixed-wing aircraft, an artificial horizon (represented by a semi-transparent green horizon and a horizontal miniature wings) is integrated into the radar, and pitches and banks in accordance to the plane that the player controls. Rows of three yellow blips will also be added into the radar to indicate the position and alignment of the nearest aircraft runway.

For GTA IV and GTA Chinatown Wars, the Health and Body Armor indicators, which were initially located on the upper right side of the heads-up display, are integrated into the radar, warping around the radar's circular border; the health bar and armor bar each take up half of the radar's circumference, and the health bar will become red and blink if the player's health is low. In addition, in GTA IV also indicate the extent in which law enforcement scouts for the player whenever they have a wanted level; this is not implemented in the GTA Chinatown Wars radar due to a significant different police evasion system.

In GTA V, the radar has been significantly redesigned and includes several features not present in previous games.