Difference between revisions of "Skimmer" 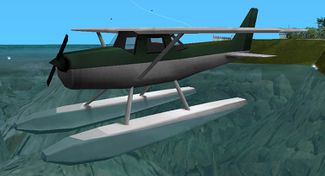 A Skimmer in GTA Vice City.

In all its appearances, the Skimmer is simply a redesigned Dodo with a pair of large pontoons on the bottom in place of landing gears; the GTA San Andreas rendition further includes reinforcement on the connection between the pontoons and fuselage, as well as harnesses between the pontoons, fuselage and the tailfin, and a four-blade propeller. Although seemingly plausible, the design of the Skimmer is somewhat impractical in real-life given the weight and size of the pontoon in relation of the plane and its power, which makes takeoff more difficult than in the games.

Whilst being able to land on water, the Skimmer in GTA Vice City and GTA Vice City Stories does not feature any functional doors, resulting in the player simply warped inside the plane when entered. If the player exits the plane, however, they immediately spawn on top of the plane's wing and the plane would immediately stop no matter the speed. This problem was rectified in GTA San Andreas, when the plane's door can be opened, and the player can enter and exit through the doors, a feature only possible with the Skimmer's recategorization from a boat to a plane.

Aside its beneficial amphibious nature, the Skimmer's performance in the air is very much similar to the Dodo in that they both have the same sluggish acceleration and poor top speed, owing to a low-power engine; the Skimmer also has the tendency of stalling easily even if the upward pitch of the plane is only moderately steep. These traits makes the plane merely suitable for steady, slow air travel.