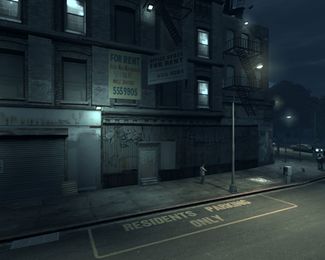 The exterior of the South Bohan Safehouse.

The safehouse was originally Mallorie's cousin's apartment but Mallorie gave it to Niko and Roman after the Broker Safehouse and Roman's depot burnt down during the mission Roman's Sorrow. It is the only safehouse that is available until new safehouses are earned in Algonquin after the missions The Holland Play (can be given by Niko depending on a decision made by the player) and Hostile Negotiation (bought by Roman).

Despite being unlocked later in the game, the safehouse is already accessible to the player at the beginning of the game through the rear door but the player cannot save the game, or use the wardrobe. Although the player can still watch television. The safehouse may also be entered via the same entrance in The Lost and Damned, although the television is not usable. Players in the original game may also utilize its parking lot before it is unlocked.

Despite it technically being his home, when Roman is invited to or asks for an activity, Niko must often drive all the way back to Hove Beach. Indeed, the safehouse's somewhat remote location, requiring navigating traffic jams and a toll bridge, makes it difficult to reach most East Island-based friends within the allotted hour (one way around this is to call Roman's car service for an instant trip, though Niko still needs to obtain a vehicle at the other end). For this reason, if Niko instigates a friend outing, it's recommended he not do so from the safehouse or, for that matter, anywhere in Bohan (dating Carmen Ortiz being an exception). Little Jacob's gun car service should also not be triggered from the safehouse as his location is on Charge Island, requiring navigation of a very convoluted road system to reach; head a few blocks north of the safehouse to trigger a more convenient location.

After the Hostile Negotiation mission, dialog implies that the Bohan safehouse is no longer safe. However, the safehouse remains active and can continue to be used for the usual activities (saving, parking cars), although the safehouse's icon briefly disappears from the map after the mission (it returns).

It is almost similar to the Broker safehouse, but is larger and slightly better, and has a Honkers strip club poster and various items lying all over the place such as cola bottles, Burger Shot items. It also has a futon (sofa-bed) for saving the game. Various furniture includes a table with fold-out chairs, an armchair near a TV, and a wardrobe to store Niko's clothes. A preacher or hippy may occasionally soapbox across the street from the safehouse. At night, one or two prostitutes hold court a few doors down from the safehouse, though the option of bringing them into the safehouse is not provided.