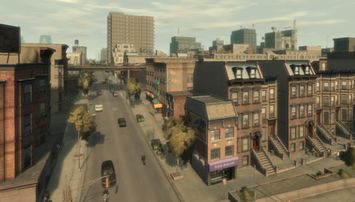 South Slopes, as viewed to the northwest from the Broker-Dukes Expressway.

South Slopes appears to be an amalgam of many central and western Brooklyn neighborhoods: it is a brownstone-laden neighborhood with a diverse population. However, it's more likely a recreation of Park Slope, given its name and location adjacent to Outlook Park (in real life, Park Slope is west of Prospect Park).

Within South Slopes boundaries lies an LCPD station at the intersection of Erie Avenue and Sundance Street.

The Schottler station of the Liberty City Subway is actually located within South Slopes - not in the adjacent neighborhood to the north for which it is named, as its name would suggest. The station is located at the intersection of Sundance Street and Seneca Avenue. Its mezzanine, entry staircases, and viaduct on which it is located appear to have been modeled after the design of the stations along the Queens Boulevard stretch of the IRT Flushing Line, going along with the distinct Sunnyside influence of Schottler. It is served at all times by the 3/8 Broker Line.

Retrieved from ‘https://www.grandtheftwiki.com/index.php?title=South_Slopes&oldid=366949’
Category:
Cookies help us deliver our services. By using our services, you agree to our use of cookies.