Difference between revisions of "Streetfighter" 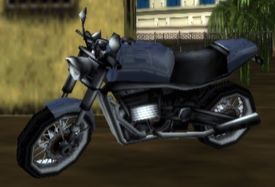 The Streetfighter is very easy to handle, thus it is a great beginner bike, due to its good speed and handling. This was used at the beginning of the game when Jerry Martinez tells Victor Vance to go to a boat, where a person is waiting for him.

The bike can be seen driving around Vice City and can also be found at Fort Baxter Air Base (until the base cannot be accessed after Victor is dishonorably discharged from the army in "Conduct Unbecoming").