Difference between revisions of "Territory Glitch" 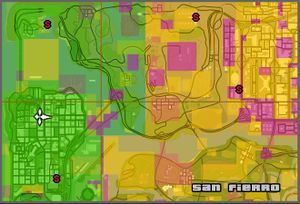 A map showing the glitch.

When the Territory Glitch in Grand Theft Auto: San Andreas occurs, a location can somehow become Gang territory. It is possible to replicate the glitch. Every area in San Andreas named on the map is a territory, even the restricted areas Area 69 and Easter Basin Naval Station. However, it is impossible to take over these areas as not only are there no gang members in those areas, but they also trigger a 5-star wanted level upon entry.

Type 1 involves going out of the map and heading in any direction away from the state. It should take 30 minutes. Do not stop your vehicle, turn back, or pause game. Several of the following glitches can occur:

If the turf comes up, it will hopefully be covered in gangs. Strangely, red turfs flash in Las Venturas on occasion, suggesting a deleted gang, possibly the Italian Mafia.

Enable the Cars fly cheat or Cars on water cheat. Drive in any direction off the map. Keep driving for 30 minutes, then swim under water and allow yourself to drown. Also, you can enter the "Destroy all cars" cheat as soon as you go into the water after the 30 minutes have passed. When you spawn at the hospital, the map will be covered in territories, if it worked.

Drive your boat off the map for 30 minutes, then die. When you spawn back at the hospital the glitch should work.

Fly an airplane or helicopter away from map for 30 minutes then jump out and drown (suicide cheat, or just causing an explosion works as well). When you spawn outside of the hospital, the map should be covered with your territories.

This glitch does not work for the Xbox or Greatest Hits versions. Type 2 works for it though.

You can use this glitch if there are still enemy gang territories. When your turf is under attack, use the infinite ammo cheat. Then throw satchel charges at the enemies. All enemies must have at least one satchel charge stuck to them. Leave the area and head to the place you want the gang territory to be. Activate the charges. If the explosion doesn't go off, then go somewhere where it's in range. The explosion should convert the place where you first activated the bombs to GSF territory. Another way instead of using cheats is to stand in a nearby unfilled area and kill the attacking gang members. You will get that territory too. You can make it stronger by doing it a couple of times.

It is also possible to replicate the glitch by provoking gangs that you can normally not take over, such as the Varrios Los Aztecas, Da Nang Boys, San Fierro Triads, and San Fierro Rifa. To do this, you must kill as many members as possible of these gangs. A good recommendation is doing a drive-by with recruited GSF members. If you are successful, these gangs will start attacking your hoods, and their hoods will be available for taking over as well.