Difference between revisions of "Wanted Level in GTA III Era"

The wanted level of the player is indicated by the row of highlighted stars on the player's Heads-Up Display. 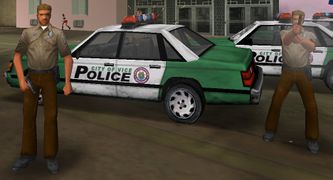 The Wanted Level in GTA III Era is a measure of how much the player is wanted by the law enforcement of their respective area, and therefore how much force will be used in pursuit of the player. As the player's wanted level increases, more powerful forms of law enforcement will pursue him. In GTA III Era games, wanted level is measured on a six-star scale, ranking police lethality from the non-lethal one star to the extremely aggressive, and sometimes lethal, six stars.

Committing several minor crimes in quick succession - such as beating pedestrians up, destroying cars, etc - will earn him one star. Continuing to commit crimes or resisting arrest will often lead to a second star, and will increase. Committing serious crimes (for example, throwing a grenade into a large crowd of bystanders) often earns the player multiple wanted stars outright.

If the player has one or more wanted stars, nearby police will give chase and attempt to arrest the player. If the police have successfully arrested the player, the message "Busted" will appear on the player's screen. An arrest is executed by either knocking or throwing (in the case of vehicular arrests) the player onto the ground and holding him at gunpoint, or by opening the player's car door and holding him at gunpoint. In both cases, the player has no choice but to give up. If arrested, the player is transported to the nearest police station and is released some time later. After the player is released, he will lose $100 and all of his weapons and armor will be confiscated (except in GTA San Andreas after dating Barbara Schternvart in which case your weapons will not be confiscated. In GTA Vice City Stories, you can buy back the weapons for $2000.)

The player's wanted level can be decreased various ways. A one-star wanted level will disappear on its own if the player "lies low" for a while (stays out of sight and doesn't commit a crime). Higher wanted levels can be lost through picking up Police Bribes (each one reduces the player's wanted level by one star), running a vehicle through a Pay 'n' Spray or going to airport and buying a plane ticket to another city in San Andreas. You can also see Lowering Your Stars for more ways.

It is notoriously difficult to survive higher wanted levels without the use of cheats or modifications. In all GTA III Era games, there are cheats to raise and lower wanted levels. In GTA San Andreas and GTA Vice City Stories, there is a cheat to prevent the player from even obtaining a wanted level at all. However, the player can still get attacked by the police at the police impound stations.

A wanted level is cumulative — repeatedly committing "one-star" crimes within sight of police may lead to a two-star rating, and so on. It is possible to reach a six-star wanted level by simply shooting and killing a lot of pedestrians, but some crimes are more serious than others, and some can earn more stars outright.

As the player's Wanted Level increases, law enforcement spends less energy trying to arrest the player and more trying to kill the player at all costs. As such, it is almost impossible to get arrested at a Wanted Level of three stars or higher, although police will still attempt vehicular arrests if the opportunity arises. 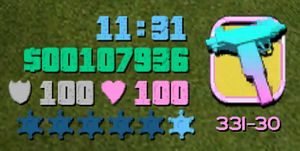 At a one star wanted level, any police officer that spots the player will give chase and attempt to arrest him. The police will attempt to knock the player down with their fists (in GTA III) and nightsticks (in other GTA III Era games). They also do not shoot unless they are threatened by the player (in GTA San Andreas, if you are holding a gun or a thrown weapon, officers will shoot at you, and also if you run over an officer but not getting killed). An exception to this rule is if you are inaccessible to the police officer; for example if you are standing on top of a vehicle, he will pull out his gun and start shooting. Police cars will follow the player, but they can be easily outrun. If the player stays out of sight and does not commit anymore crimes, a one-star wanted level expires on its own. If the player is on foot, police will exit their vehicle and chase you on foot. Only one police officer will give chase on foot at a time even if there are multiple officers in the vicinity.

A one-star wanted level is attained by committing the following minor crimes. Many of these will not immediately result in a wanted level unless a police officer(even the corpse of a police) is around to witness them or multiple offences are committed in quick succession:

At a two-star wanted level, the police start actively searching for the player. Officers now shoot to kill, including when you're unarmed, and each patrol car is occupied by two officers. Officers in cars now give chase rather than simply follow behind and often try to overtake or spin the player out. On water, armed police boats give chase.

At a three-star wanted level, pursuing police vehicles become more aggressive, driving at maximum speed, and the police will also begin to set up armed roadblocks on main roads. A police helicopter is also called in to assist and its crew follows the player, putting a spotlight on the protagonist (at night), and shoots at the player via an invisible machine gun on the fuselage if they get a clear shot and yell various humourous remarks over a loudspeaker. Police officers begin to deploy spike strips to puncture the player's tires, making driving difficult. In GTA San Andreas, from this wanted level on, officers who come out of either a Police Car or Ranger will also ocassionally wield shotguns. Additionally, in Vice City and GTA Vice City Stories, undercover 'Vice Squad' detectives armed with Uzis and driving Cheetahs also give chase.

At a four-star wanted level, the police will drive more aggressively and SWAT teams join the chase. SWAT members wear body armor and are armed with Uzi sub-machine guns. Roadblocks now consist of the heavier and larger SWAT vans, making them more difficult to ram through. The pursuing police helicopter fires at the player more frequently and, from GTA Vice City onwards, rappels SWAT members down to the player's location. In GTA San Andreas, the police helicopter is often joined by a News Chopper, and military jets now pursue and attempt to shoot down the player if he is flying an aircraft.

At a five-star wanted level, the FBI takes over the chase and completely replaces local police on the ground (local police will still chase the player if they see him) and the streets begin to clear of civilians (In GTA Liberty City Stories, however, there are still lots of pedestrians in the streets). Four-FBI teams of heavily armed and armored FBI agents drive armored cars and SUVs and make for formidable opponents. The FBI agents are armed with AK-47s and 9mm handguns in GTA III and MP5s in later games. Their driving is even more aggressive and they usually opt to ram the player's vehicle head on at high speed and then batter it to pieces before he/she can recover. In GTA III, the pursuing police helicopter is joined by a second, and both stick to the player doggedly and fire at the protagonist whenever they get the chance. The roadblocks now consist of FBI vehicles, which are easier to ram through, but the FBI agents' MP5s tear through most vehicles fairly quickly. The waters are saturated with Predators at this wanted-level. Trespassing inside a military base will release a five star wanted level and cops swarm in and attempt to kill the player. The FBI are particularly perilous to engage, as their SMGs are likely to make short work of the player's getaway vehicle. Due the increased risk of being shot to death, use of a motorcycle as a getaway vehicle is especially not recommended. All officers employ more advanced driving techniques, such as the PIT maneuver, as they try to make the player spin out of control and crash.

At six stars, the National Guard will take over from the FBI and will give chase in Barracks OL trucks and Rhino tanks, making travel in ordinary vehicles extremely hazardous. Civilians have almost completely disappeared from the streets at this point (In GTA Liberty City Stories, however, there are still lots of pedestrians in the streets), and the soldiers drive with total disregard for anything but ramming the player into oblivion. Roadblocks now consist of Barracks OL trucks. At six stars, police helicopters rule the skies, the sea is thick with police boats and in addition to the army, police officers are everywhere - appearing from all directions in large numbers. If the player cannot get to a Pay 'n' Spray with a suitable vehicle, stealing a tank or taking to the skies in a helicopter and trying to pick up police bribes around the city are often the only practical options for reducing a six-star wanted level. The Army soldiers carry M16s, MP5s or M4s depending on the game. Unlike in the story mode where enemies often miss, the soldiers are pinpoint crackshots, and a gunfight is considered suicide as the army will take the player down very fast. Survival and escape is most difficult, and a very fast and/or durable vehicle is recommended. All law enforcement vehicles fire upon and ram the player relentlessly with very little regard for collateral damage. On foot, the player must move and/or retaliate quickly to avoid being cut down by gunfire; however, fleeing is the better option when pitted against several officers.