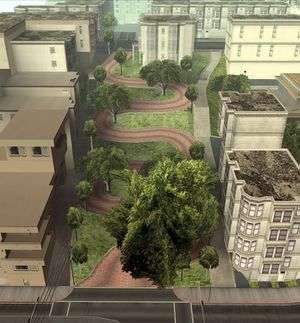 Windy Windy Windy Windy Street is a street in San Fierro, San Andreas, located at the eastern edge of Calton Heights. This landmark is modeled after San Francisco's famous Lombard Street, which also bears the name "crookedest street" due to the winding nature with which the street progresses through the one block between Hyde and Leavenworth Streets.

Like its real-life counterpart, Windy Windy Windy Windy Street is very difficult to navigate with an automobile. The tree-lined street is flanked by concrete step-sidewalks for easier passage, but is generally a poor choice for traveling through the city, and exists as more of a spectacle than a useful transportation medium (though there is a unique stunt jump available here).