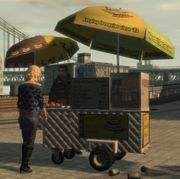 Chihuahua Hotdogs is a brand name for hotdogs established in 1982 in Grand Theft Auto IV.

Their slogans include "You can't beat our meat" and "Keeping it regular since '82".

Retrieved from ‘https://www.grandtheftwiki.com/index.php?title=Chihuahua_Hotdogs&oldid=402406’
Categories:
Cookies help us deliver our services. By using our services, you agree to our use of cookies.