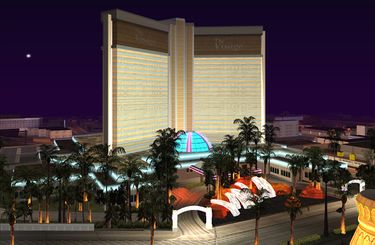 The Visage in GTA San Andreas.

The Visage is an inaccessible casino hotel in Grand Theft Auto: San Andreas located along The Strip in Las Venturas, San Andreas.

Designed to be the second-largest casino in Las Venturas, behind The Emerald Isle, the building consists of a massive Y-shaped hotel block based on an extensive low-rise base with an integrated two-storey parking garage in the rear, and fronted by a lofty water feature. The hotel block, highly visible from much of western Las Venturas, is a prominent feature of the city's skyline.

The Visage is a close counterpart of The Mirage Resort & Casino on the Las Vegas Strip in Las Vegas, Nevada. Its name may or may not be a play on the phrase "deux visage" which is French for "two-faced".

Retrieved from ‘https://www.grandtheftwiki.com/index.php?title=The_Visage&oldid=363174’
Categories:
Cookies help us deliver our services. By using our services, you agree to our use of cookies.