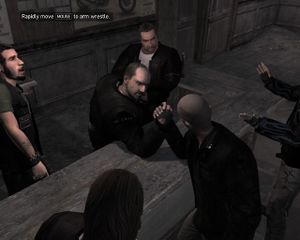 The player in a round of arm wrestling at the Lost MC Clubhouse in The Lost and Damned.

Arm wrestling is an activity in The Lost and Damned Grand Theft Auto IV that can be accessed at the Lost MC Clubhouse, outside the Angels of Death Clubhouse and outside the Uptown Riders Clubhouse in Northwood, Algonquin.

The activity is basically a wager-based minigame in which the player is required compete against a computer controlled opponent for two or three rounds. The player must successfully win two rounds in order to win wholly; if the player loses in the first or second round, the game is allowed to be extended to a third round.

During a round of arm wrestling, the player needs to rapidly move the right thumb stick from left to right for console versions or the mouse for the PC version to win; the tougher the opponent, the more rapidly the player is required to move the thumb stick or mouse.

The cost of playing varies in each of the game's three biker clubhouses, but generally requires the player pay hundreds of dollars to join, with a possibility of winning double that amount:

The Lost MC are the most easy to beat, while the Uptown Riders are the hardest to beat.