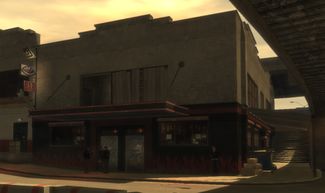 The Angels of Death's clubhouse in The Lost and Damned.

In the Lost and Damned mission Action/Reaction, members of the Alderney Chapter of the Lost MC arrive at the Clubhouse with Chapter president Billy Grey on his orders, under the lie that the gang members residing there had murdered fellow brother Jason Michaels. In reality, the Angels of Death had stolen a large amount of heroin off of some Triads that had come into Liberty City a few weeks earlier, and Billy was using Jason's death as an excuse to steal it from them. He is successful, as the Lost murder dozens of bikers outside and inside the clubhouse, and destroyed the upper level when Vice President Johnny Klebitz shot a grenade into the second-level window.

Located in North Holland, Algonquin, the clubhouse is originally inaccessible to the player in GTA IV, but became prominent in The Lost and Damned as a location in "Action/Reaction" when The Lost attack the clubhouse and steal some of their heroin; the player can arm wrestle under the overpass close to the clubhouse.

The clubhouse's exterior in The Lost and Damned is designed with a window and two double-door entrances at the north side and an exit on the west side. The interior's primary features include a bar as well as an adjoining underground gym. In addition, there is a bedroom upstairs, which is not intend to be accessible otherwise; however, there is a glitch that helps the player get inside and explore it freely, working on both downloadable version and Episodes from Liberty City version of The Lost and Damned. This glitch also works in the Episodes from Liberty City version of The Ballad of Gay Tony, seeing that both DLCs share the same city design.

Despite not being open during the single player, the clubhouse in fully accessible in both The Lost and Damned's and The Ballad of Gay Tony's multiplayer.