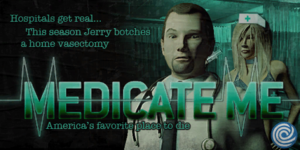 Billboard advertisement for Medicate Me

Medicate Me is a television show advertised in Grand Theft Auto IV. While it is not viewable on the channel that airs it (CCC), previews can be heard on the radio. It is a medical drama which follows the doctors of St. Judas Hospital, who enjoy playing God. The radio advertisements claim that the show is "A relaxing home entertainment drama for the whole family" despite the fact the show has over the top action and ludicrous episode plots. One clip of an episode starts out with a kid getting a splinter but escalates into a full scale terrorist attack on the city. Another clip has a doctor telling a fellow doctor, who is a lesbian, that she is eight months pregnant.

The show is a parody of medical dramas such as ER, Grey's Anatomy, House, or possibly Scrubs. However the name is inspired by a different drama called Rescue Me, which is about firefighters in New York City.

Retrieved from ‘https://www.grandtheftwiki.com/index.php?title=Medicate_Me&oldid=317405’
Categories:
Cookies help us deliver our services. By using our services, you agree to our use of cookies.