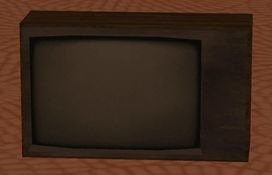 Televisions appear in-game in the Grand Theft Auto series although they have by large been non-interactive props (although they might be animated in cutscenes and certain missions); in Grand Theft Auto: San Andreas, however, televisions of various forms can be stolen from homes in the burglary side-mission. Various TV shows have also been advertised in GTA III, GTA Vice City, GTA San Andreas, GTA Liberty City Stories and GTA Vice City Stories but are usually unseen. The ability to watch TV was first trialed in GTA Vice City Stories, where the player can watch mission cutscenes with the TV in The Clymenus Suite.

Grand Theft Auto IV introduced the ability to watch television shows in most safehouses, although this feature is largely useless in actual gameplay and is more of a minor feature used to pass time.

Televisions in Grand Theft Auto IV appear as interactive devices that allowing the player to watch television shows, although they have very little bearing to actual gameplay. Each safehouse in in GTA IV has a television, as is the case in GTA IV's episodic packs, The Lost and Damned and The Ballad of Gay Tony; in TLAD however, access to televisions becomes unavailable upon completion of the storyline as only one safehouse, which is disabled in the end, is the only location where a television should be available.

Each Television allows the player to watch up to three simultaneously running channels (Weazel, CNT, and the Public Broadcasting Corporation); however, the channels are not numbered, so finding a show is more or less coincidental. Most of the shows are running time-shifted, so while "I'm Rich" may be almost over on one channel, for example, it may just start on another.

The feature is carried over to its episodic titles, including The Lost and Damned and The Ballad of Gay Tony, with new shows and advertising added in. However, depending on whether the player opted for downloading episodic DLC or obtaining Episodes from Liberty City, the availability of shows and ads from GTA IV in both episodic titles, like radio stations, varies between DLCs and Episodes from Liberty City:

While there is one television for each safehouse in GTA IV, the player can only watch TV at the Lost MC Clubhouse in The Lost and Damned until "Get Lost", to which point the player has no legal means of watching television; in The Ballad of Gay Tony, one TV is available in Luis' safehouse.

GTA IV alludes that two other television networks, CCC and MeTV, exist in the in-game universe, but they are unviewable.

Weazel is a parody of Fox Broadcasting Company.

CNT is a play on CNN or TNT, possibly a combination of both as CNT also has a news program.

CNT is a refererence to "cunt", a term for vagina.

During the Los Santos Riots, looters can be seen running around and carrying televisions.

In the mission Crime and Punishment, Niko Bellic has to find a van full of Televisions and deliver it to a Faustin Family hideout, for a buyer to purchase.

In the mission Lure, Niko Bellic can kill Clarence Little's Associate, by shooting his satellite dish, messing up the signal and forcing the target into view of the window, or he can shoot the TV directly. Alternatively Niko can also call his phone.

In the mission Friend Request, after fitting an explosive device into the prototype Lifeinvader phone, Michael De Santa has to go to his home to watch Jay Norris' live presentation. As he reveals the phone, Michael calls Jay Norris from his phone, answers it and the phone explodes to his head, killing him. Micheal's TV is unique as it is actually a projector set up in his ceiling, displaying he video across a large white backdrop.

Retrieved from ‘https://www.grandtheftwiki.com/index.php?title=Television&oldid=404734’
Categories:
Cookies help us deliver our services. By using our services, you agree to our use of cookies.