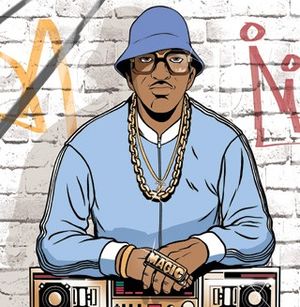 Mr. Magic is a real world DJ who appears as a character in the 3D Universe appearing as the Wildstyle Pirate Radio.

Mr. Magic is, in 1986, the DJ of Wildstyle Pirate Radio. He has a disliking for the Vice City Police Department and Yuppie and the Alien.

"Super Rockin'" Mr. Magic (full name John Rivas) is an American DJ who was born on March 15, 1956 in The Bronx, New York City and died on October 2, 2009 in Brooklyn, New York City. According to Rockstar Games, "he is the first ever rap radio DJ." Rockstar has a RIP dedication to Mr. Magic after he passed away on 2 October 2009.[1]

The Magic is here. A pioneer in the truest sense of the word, "Supa Rockin" Mr. Magic has the distinction of being the very first radio personality ever to bring rap music to the airwaves. On Wildstyle Pirate Radio, Mr. Magic hosted the innovative new sounds of rap music and early 80's electro for all of Vice City's fly girls and fly guys, troopers and troopettes, broadcasting illegally, we are repeatedly told, 'from a secret location'. Magic was also hosting a weekly show in New York at the time…[2]

Wikipedia has an article on:
Mr. Magic
Retrieved from ‘http://www.grandtheftwiki.com/index.php?title=Mr._Magic&oldid=409778’
Categories: