Yuppie and the Alien 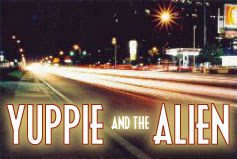 Yuppie and the Alien is a TV show on VBC heard advertised in Grand Theft Auto: Vice City. The show revolves around two policemen: a yuppie played by Morgan Daniels and an alien from Alpha Centauri. The show is mentioned by Mr. Magic on Wildstyle and by Kent Paul on his website.

The show appears to parody "buddy cop" films and TV shows of the 1980s.

Announcer: This fall, a new hard-hitting police drama is coming to Friday night. He was a well to-do cop, transferred to a trouble precinct Downtown. His new partner is a space traveler, with a passion for justice. It's Yuppie and the Alien.

Captain: Look! You may vaporize dissidents in Alpha Centauri, but in this precinct, we do things by the book!

Announcer: Don't miss this one of a kind police drama. They're fighting crime the hard way, in designer clothes, with a quarter of a million dollar sports car, and a UFO.

Retrieved from ‘https://www.grandtheftwiki.com/index.php?title=Yuppie_and_the_Alien&oldid=345737’
Category:
Cookies help us deliver our services. By using our services, you agree to our use of cookies.