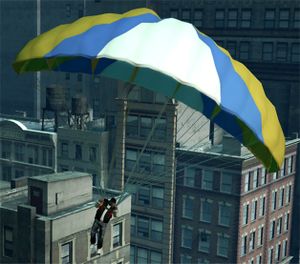 Firstly introduced in GTA SA, the glitch is, in a nutshell, a free fall. The glitch is caused by an unknown factor, when the player is falling and pull the switch, the top of the parachute disappears, and you would be unable to turn or let go to perform the fall glitch. The player will fall with the speed of falling while moving forward as if falling with the parachute in fast motion. It will ensure certain death, unless above water.

Reintroduced in the second DLC content pack for Grand Theft Auto IV, The Ballad of Gay Tony features the ability to use parachutes, allowing the player to base jump from buildings and helicopters in safety.

However, the nature of the parachute's turning system makes it possible for the player to actually achieve vertical lift, suspending their glide for an indefinite amount of time.

This glitch can be exploited from any height, as long as the player has the parachute active.

Pull back with the left thumb-stick, putting the player in the 'slow fall' position, then, rhythmically press the left and right triggers together. At a certain rate, the player begins to stop falling and start going up.

With sufficient altitude, it's possible to reach incredible heights, even leaving the game's skybox. However, if the button to turn is pressed too rapidly, the parachute will break, ensuring certain death, unless above water.

Due to a patch by Rockstar the glitch no longer works in The Ballad of Gay Tony. But it is still possible as long as you enter the invisible parachute glitch.