Grand Theft Auto: The Ballad of Gay Tony (official abbreviation TBoGT) is the second episode of two downloadable add-ons for Grand Theft Auto IV for the Xbox 360. It was released on October 29, 2009. The Playstation 3 and PC versions were later released on April 13, 2010 in North America and on April 16, 2010 in Europe.

The protagonist is Luis Fernando Lopez, a part-time hoodlum and full-time assistant to legendary nightclub impresario Anthony "Gay Tony" Prince. The storyline interweaves with the original game and first episode, most notably the Museum Piece mission that involves all three protagonists. As well as a new storyline, missions and characters, it also features new game mechanics, vehicles, weapons, side missions, collectibles and achievements. As with TLAD, new radio and in-game television programming is included.

Rockstar says, "Players will struggle with the competing loyalties of family and friends, and with the uncertainty about who is real and who is fake in a world in which everyone has a price." According to Rockstar's official website, "The Ballad of Gay Tony injects Liberty City with an overdose of guns, glitz, and grime." Sam Houser, the founder of Rockstar Games, said before its release "This episode's focus on high-end night life contrasts with the biker gangs portrayed in The Lost and Damned, whilst giving us a lot of new gameplay possibilities."

As a downloadable expansion, it costs $19.99 (USD) on both Xbox Live and PlayStation Network.

At first, The Ballad Of Gay Tony, along with the first piece of downloadable content, The Lost and Damned was going to be released to the PS3 and PC on March 30th, but due to Sony Computer Entertainment wanting to edit some of the radio stations, it was released on the later date of April 13th in North America and April 16th in Europe.

The stories for Grand Theft Auto IV, The Lost and Damned, and The Ballad of Gay Tony were written by Dan Houser and Rupert Humphries. All 3 stories happen at the same time, intertwining with each other,

In contrast to The Lost and Damned, a gritty and hardcore account of life in a biker gang, The Ballad of Gay Tony shines light on arguably the most glamorous place on earth - the celebrity nightclub scene. Luis Lopez and Gay Tony Prince are the two main characters struggling with, as Rockstar Games says themselves, "the competing loyalties of family and friends, and with the uncertainty about who is real and who is fake in a world in which everyone has a price". Being in debt to gangsters, Luis and Tony are barraged with the temptation to sell out their beliefs and even each other for money - their beliefs often taking the symbolic form of their shared nightclub, Maisonette 9. The duo surprisingly turn their noses at some substantial opportunities (Yusuf Amir franchising them, or Cloe Parker bailing them out), but are heavily tempted and will even abuse each other's trust for others (Ray Bulgarin buying them out, Mori Kibbutz having a high-stakes bet, Rocco Pelosi threatening them, and Tony himself resorting to fraud). Very few if any characters make it the entire game without telling a lie; sometimes because of business, other times because of a social imbalance (such as Yusuf wanting to impress Luis, or Tony mocking Mori behind his back while flattering him in person) - which gives the impression that no one is to be trusted. At the end of the game Tony and Luis have resolved trust issues they have with each other, successfully erased their debt and tell Yusuf Amir they won't franchise, leading to the moral that loyalty to "family" (blood or otherwise) should not be sold for all the money in the world. 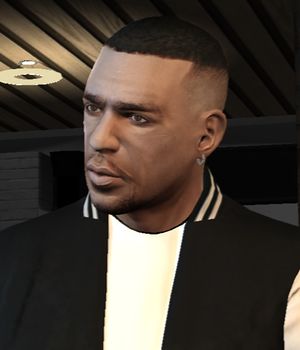 Luis Fernando Lopez, the protagonist of The Ballad of Gay Tony

Another important set of characters, though they do not effect the main storyline, are the fictional celebrities met in the Club Management missions. Luis and Tony are made the peers and trusted confidants of extremely powerful celebrities parodying Paris Hilton and Prince Harry among others. Beyond the comic value of pop culture, it is meant to portray opportunity raining from the sky for Tony and Luis, some of which might lure them to abandon or endanger each other.

As read in the booklet included with Episodes from Liberty City:

Luis Lopez is a man who solves problems, and when you are the nightlife legend, Anthony "Gay Tony" Prince's right-hand man and bodyguard, there are many problems to solve. A playground for vapid celebrities and tragic socialites, Algonquin's nightlife scene is all about glitz and glamour, and owning the two hottest clubs in town (Hercules and Maisonette 9) makes Tony the undisputed party king of Liberty City. He appears to have it all - wealth, power, respect - but, in debt to mobsters, loan sharks and the tax man, facing up to a changing world and the terrible economy, and under threat from pretenders to his crown, Tony begins to spiral more and more into a midlife crisis from hell. Join Luis as he fights to save Tony's empire from the brink of collapse and to make his own mark in a world defined by decadence and excess, all while keeping his mother, Adriana Yanira Lopez quiet and stopping his friends, Armando Torres and Henrique Bardas from calling him a sell out. The party is almost over. It is up to Luis to keep it going.

Luis Fernando Lopez is being held hostage at the Bank of Liberty, during a robbery involving Niko Bellic, Patrick McReary, Derrick McReary and Michael Keane. A local gun club member lying next to him, Eugene Reaper, shoots and kills Keane and is then killed by the McReary brothers in retaliation. The scene cuts to the aftermath of the robbery; Luis is being questioned by the police about the incident before proceeding to Gay Tony's loft. On the way, he is nearly run over by Niko Bellic (returning from the robbery) and Johnny Klebitz who rides past him. Rocco Pelosi, a senior Ancelotti mobster, and his accomplice Vince enter the loft and collect Tony's club income for the week as interest repayment on an outstanding loan. Tony then discusses with Luis his dire financial situation with his two clubs, Maisonette 9 and Hercules. In an attempt to curry favour with Rocco, Tony and Luis go to Chinatown to negotiate a deal with a senior Triad. Billy Grey, President of The Lost Motorcycle Gang is seen arranging an ambush on Johnny Klebitz and Jim Fitzgerald with the Triad as Tony and Luis enter the room. The negotiations with the Triad soon turn awry, and Luis protects Tony as they escape Chinatown.

Luis visits his mother, who also has financial issues, and his childhood friends Henrique Bardas and Armando Torres. Luis' mother does not approve of his lifestyle and would like him to attend to college. Henrique and Armando are Luis' friends who are heavily involved with the narcotics distribution trade. Luis soon becomes acquainted with Yusuf Amir, a real estate developer in Liberty City. Luis helps Yusuf acquire several vehicles, including an experimental military grade chopper called the "Buzzard", an APC used by the NOOSE, and even a subway carriage.

Meanwhile, Tony is headed in a downward spiral due to substance abuse, supplied by his boyfriend Evan Moss. Luis, Tony and Evan head to the docks to buy two million dollars worth of diamonds from a cook coming in on a tanker called the "Platypus". During the exchange, members of the The Lost (led by Johnny Klebitz) attack and kill Evan and acquire the diamonds. Tony promises Luis that he will quit the substance abuse and introduces Luis to Mori Kibbutz, and his younger brother Brucie. Mori is highly egotistical, constantly bullies and belittles Brucie, a source of irritation to Luis who repeatedly stands up for the younger brother. Through entering Triathlons and undertaking dangerous police chases, Luis eventually managed to cancel Tony's debt to Mori. After Brucie finally retaliates and punches Mori, he later shows up at Maisonette 9 to thank Luis. Brucie leans in towards Luis after a series of compliments, strongly implying an attempt to hit on him. Luis strongly declines, and Brucie awkwardly attempts to convince Luis that he was just testing him to see if he was gay.

Tony and Luis meet Ray Bulgarin and his associate Timur at Maisonette 9, who offer Luis some work in exchange for financial help. Luis helps Bulgarin eliminate some corrupt federal agents and acquire the Liberty City Rampage hockey team. Gracie Ancelotti gets Tony back on the drugs and is later kidnapped by unknown assailants. The Ancelottis establish that Gracie has been kidnapped because of the diamonds and are pointing the blame at Tony and Luis. Tony learns that the diamonds are being exchanged at the Libertonian, and sends Luis to retrieve them. Luis ambushes the exchange (involving Niko Bellic and Johnny Klebitz) and escapes in the Buzzard, which has since been gold plated.

Bulgarin phones Luis, telling him to go to the roof of a building in midtown Algonquin. As Luis uncovers the severed head of the cook from the "Platypus", Bulgarin explains that the diamonds belong to him and accuses the cook, Luis and Tony of colluding to steal them. It emerges that Bulgarin has led Luis to an ambush on the rooftop, and he escapes alive. Gracie’s father, Giovanni Ancelotti, then orders Luis and Tony to trade the diamonds with the kidnappers and get Gracie back. At the exchange, Bulgarin shows up and orders his men to attack the assailants, Packie McReary and Niko Bellic. Bulgarin flees the scene and amidst the chaos the diamonds fall into a dump truck headed the opposite direction. Luis, Tony and Gracie escape in a speedboat.

Because of being preoccupied with recent events, Tony refuses to pay his debts and the city closes down all of his clubs. Luis meets Rocco and Vince in the restrooms in Middle Park, and they explain to him that he must kill Tony, or the Ancelottis and Russians will team up and kill Tony, Luis and all of their friends and family. Luis shows up at Maisonette 9, and contemplates shooting Tony before pointing the gun at Vince and shooting him in the head. Tony warns Luis not to shoot Rocco, as he is a "made man". Rocco escapes and the Russians show up ensuing in a huge gunfight within the club. Tony blames Luis for contemplating to kill him and flees to his apartment to pack and move to the desert. Luis convinces Tony that he chose not to kill him because it is them against the world, and that they need to resolve their situation. Luis ventures to Firefly Island to ambush a Russian heroin exchange, telling Tony to hide out by the Monoglobe in Meadows Park.

In the fairground, Luis destroys the heroin and kills Timur, who mentions that Bulgarin is fleeing the city by plane within two hours. After an opportune phone conversation, Yusuf shows up in the Buzzard and eliminates the pursuing Russians while Luis drives to the airport. Luis manages to board the plane, and kills all of the henchmen onboard. A vengeful Bulgarin emerges from the cockpit holding a grenade, threatening destruction to both of them if Luis kills him. Luis takes the risk and shoots Bulgarin, who drops the grenade causing it to explode. Luis parachutes out of the burning wreckage of the plane to safety, and heads to Meadows Park where Tony is waiting.

As for the diamonds, they in the end are found by a street dweller among a heap of garbage when Luis accidentally bumps into him en-route to meeting Tony at Meadow park.

Retrieved from ‘https://www.grandtheftwiki.com/index.php?title=The_Ballad_of_Gay_Tony&oldid=396084’
Categories:
Cookies help us deliver our services. By using our services, you agree to our use of cookies.