Porter Tunnel Delayed (Again) is an article in the Liberty Tree newspaper in September 2001 and is written by Ken Dellamonica. 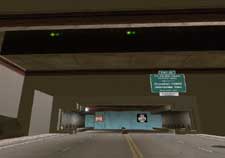 The long delayed Porter Tunnel project, linking Liberty City's two island boroughs, Staunton and Portland. Then there was the leak. Then there was the spate of corruption scandals involving slush funds, back-handers, fore-handers and more handers that have meant the project has always been destined to come in over budget and over schedule.

Last year, we were promised a big opening party on September 1, but that date has come again, and the City Transport Commission are keeping their cards close to the chest. "Let's just say the balloons have been put on ice," said one official, "Sure we could have had a party, but the simple fact of the matter is that the tunnel ain't done. And when the tunnel's done, then we'll have the party." When asked on a likely completion date, he answered, "Soon, depending on who you ask, could be next month, could be a year. Building tunnels ain't as easy as falling off a log." Commenting on where the money was coming from to finish the project, he was adamant, "We stole some off the schools budget. And fair enough. If you ain't got a tunnel, how are the kids gonna get to school? This was a chicken and egg situation and let's be honest, this tunnel comes before any education budget, and we're going to prove it with the biggest party this town's ever seen."

Officials are expecting the tunnel to be opened some time in October or November of this year "if things go according to plan, although certain commuters may not see any improvement in services until the new year."

Retrieved from ‘https://www.grandtheftwiki.com/index.php?title=Porter_Tunnel_Delayed_(Again)&oldid=329180’
Category:
Cookies help us deliver our services. By using our services, you agree to our use of cookies.