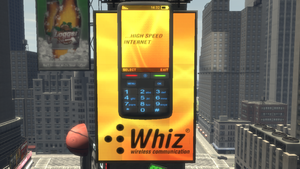 Whiz Wireless is a phone company that appears in Grand Theft Auto IV and Grand Theft Auto V. It competes with Tinkle for dominance in the wireless market, using the slogan "Whiz is stronger than Tinkle" (this makes fun of the fact that both names are slang terms for urinating).

Whiz could be a parody of Sprint, as both companys' names mean "to move quickly", and they share a color scheme of yellow and black. However, Whiz could also be a parody of Verizon, as they are both the top network in their worlds and their names sound similar and on one of their radio commercials they have a person saying "Can you see my junk now? Good." which is very similar to Verizon's "Can you hear me now? Good." commercials. The logo also bears a resemblance to Cingular, although they changed their name to AT&T Mobility in 2007, one year before GTA IV was released. AT&T itself may be Whiz, considerably since both names are 4 letters and both companies use black and orange.

In the game, Niko Bellic starts with a Badger phone until Playboy X gives him a better Whiz phone in the "Photo Shoot" mission to take a picture of a snitch. The new phone is both better looking than the old phone and has a Camera, allowing Niko to take pictures.

Retrieved from ‘https://www.grandtheftwiki.com/index.php?title=Whiz&oldid=411077’
Categories:
Cookies help us deliver our services. By using our services, you agree to our use of cookies.