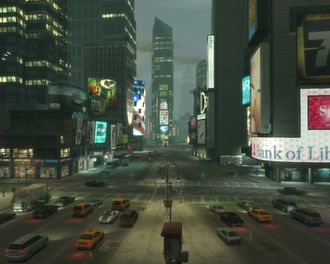 Star Junction, as viewed from the center of the district towards the south; the skyline of neighboring Triangle is seen further in the background.

Where the bright lights of Capitalism blink 24 hours a day. A great place to go if you like advertising.
-- Grand Theft Auto IV manual description

Star Junction is bordered by Middle Park to the north by Nickel Street and The Triangle to the south by Kunzite Street. The Meat Quarter, Westminster and Purgatory are on its western borders by Frankfort Avenue, while Hatton Gardens, Lancet and Easton sit on its eastern borders by Columbus Avenue. Along with the Middle Park, and The Triangle it is one of the main neighborhoods in Algonquin and Liberty City.

The entire district is designed with the commercial intersection at the center that features a diagonally placed road, Burlesque, that run from the northwest at Manganese Street to the southeast at Garnet Street in neighboring Triangle, cutting across Denver-Exeter Avenue and Kunzite Street and making up one of Algonquin's main attractions. While seemingly depicted as one, the cityscape is in fact located in both Star Junction and neighboring Triangle, which takes up the southern end of the area.

Star Junction is intended to mimic the functions of New York City's Times Square as both a cultural and corporate center of the city. Star Junction's urban design is characterized by heavily ad-laden buildings and entertainment establishments in the center surrounded by less "decorated" apartments, hotels and officer towers to the north, east and west. Its intended function also results in the presence of "Broadway" theaters and other entertainment establishments (including the Split Sides) which show different performances. The northern edge of Star Junction that borders Middle Park is designed to mimic a more homely skyline of older hotels lined along real-life Central Park South, implying Nickel Street is the in-game equivalent of 59th Street.

Needless to say, Star Junction is a spectacular location to visit at night, rivalled only by The Strip and Old Venturas Strip in Grand Theft Auto: San Andreas for its lights and spectacle, and is worth exploring on foot at some point in the game.

While most districts in Liberty City are generally not strictly adherent to the design of their real life counterpart, Star Junction's is more accurate in layout as Times Square, placing in-game renditions of Time Square's landmarks as accurately as possible. Landmarks based on those in the southern end of Times Square are in fact located in neighboring Triangle.

Star Junction borrows elements from the following buildings and structures: 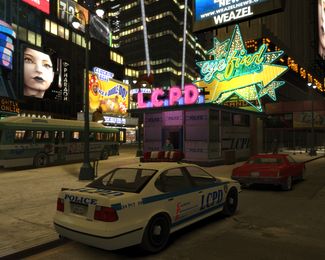 Small police station in the middle of Star Junction. A police car is seen in the foreground. 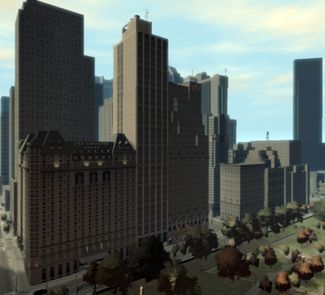 Skyline of Star Junction's northern fringe at Nickel Street, as viewed to the southwest. The Emissary and The Majestic are pictured.

Other landmarks in the area include:

Due to its concentration of skyscrapers in Algonquin, Star Junction is also a hotbed for Base Jumping in The Ballad of Gay Tony.

The nearby subway stations are Frankfort Station and Easton Station on all major lines. Buses often spawn by the side curbs around Star Junction and The Triangle or various times can be seen driving around these areas.

Retrieved from ‘https://www.grandtheftwiki.com/index.php?title=Star_Junction&oldid=367490’
Category:
Cookies help us deliver our services. By using our services, you agree to our use of cookies.