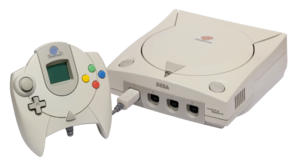 A Dreamcast console and controller.

An attempt to recapture the console market with a next-generation system, the Dreamcast was designed to supercede Sony's PlayStation and Nintendo's N64, and although generally considered to be "ahead of its time" (literally fifteen months before the PlayStation 2 and three years before GameCube or Xbox, and it was the first console which enabled players to go online), it failed to gather enough momentum before the release of the PlayStation 2 in March 2000. After the Dreamcast was discontinued, Sega withdrew from the console hardware business.

Only one Grand Theft Auto game, Grand Theft Auto 2, was released for the Dreamcast, taking advantage of its advanced processing power, which allows the game to graphically appear on par with the PC version as well as retaining various features, unlike the PlayStation version. There were also rumors of a Grand Theft Auto III port to the Dreamcast during development of the game, but it never came to fruition.