GTA III introduced many familiar features to the GTA series, including the 3D perspective, and turned the series into a huge success. It was developed for the PlayStation 2 and PC by DMA Design (now Rockstar North), with the Xbox version by Rockstar Vienna, and all published by Rockstar Games.

The game was originally released for the PS2 on October 2001, the PC on May 2002, and the Xbox on November 2003. On August 18, 2011, GTA III was released for the Mac App Store. To celebrate 10 years since the release of GTA III, a mobile version was released in December 15, 2011. In September of 2012, Rockstar Games released Grand Theft Auto III on the Playstation Network as part of the PS2 Classics lineup.

GTA III was the first GTA game to use the third-person over-the-shoulder 3D perspective in gameplay, with the camera located behind and above the player character, as opposed to the top-down perspective primarily used in its predecessors (GTA 1, GTA London 1969, GTA London 1961 and GTA 2). This new perspective has been praised as being a key reason for the success of the series, alongside the new control scheme, both of which have been used in subsequent games.

The protagonist of GTA III, Claude.


You've been betrayed and left for dead. Now you're taking revenge, unless the city gets you first. Mob bosses need a favor, crooked cops need help and street gangs want you dead. You'll have to rob, steal and kill just to stay out of serious trouble. Anything can happen out here.
-From the official GTA III website

The player follows an unnamed criminal (revealed to be named Claude from internal files in GTA San Andreas) as he arrives in Liberty City with his girlfriend, Catalina, and an unnamed accomplice who commits a robbery at the Liberty City Bank. When they exit the bank, however, Catalina shoots and kills the unnamed accomplice and shoots Claude, leaving him for dead as she escapes. Claude later recovers and is arrested by the police to be taken to jail but escapes when the Colombian Cartel attacks the police convoy and sets off a bomb on the Callahan Bridge making it explode. Claude then begins to climb through the ranks of the city underworld by working for, and eventually betraying or being betrayed by various gangs, in his quest for revenge. At the end of the storyline, Claude tracks down and kills Catalina in a long shoot out.

Liberty City consists of three islands - Portland, Staunton Island and Shoreside Vale - and tens of areas each with their own distinct set of pedestrians, cars, and environment. The islands are based loosely on the boroughs of New York City - Brooklyn, Manhattan, and New Jersey, respectively - and elements from other major cities such Chicago and Los Angeles.

This is the old, industrial district, consisting largely of workmen in old cars, the Leones, Triads, and Diablos. This is the first area the player can access in the game.

Here you will find the docks, the Red Light District, warehouses, factories, markets, garages as well as some useful suppliers. The area is populated with hookers, pimps, labourers, dockworkers, politicians and general scum. Crime is rife in Portland and it has a long history of Mafia control. But this is being challenged by the Triads. A bloody turf war has been underway for several months. A delightful district with something for everyone.

This is the business district. Business people with their nice cars are located here, alongside resident gangs - the Yakuza, Yardies and Colombian Cartel. This is the second area the player can unlock in the game.

This is the suburban area of Liberty City. The wealthy live here, along with the middle class residents and gangs. The area is hilly and is home to two gangs: Colombian Cartel and Southside Hoods. This is the final area the player can unlock, the setting for the ending of the story in GTA III.

Suburban bliss and tranquility Liberty City style. Home to many of Liberty City's more affluent gangsters, Liberty City's commuter-belt is a patchwork of swimming pools, picket fences, backyards, basketball nets, street gangs and five car garages. It's littered with ostentatious mansions paid for with blood money, protected by high security guards and gates to keep out gangs of bored teenagers looking for something to do to bring some excitement to their middle class existence. The designer dogs and the station wagons give a shallow serenity to suburbia, but don't be fooled. Violence and corruption are at the heart of every home. 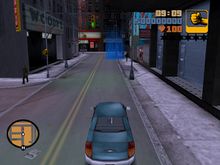 The aesthetics and gameplay of GTA III was very popular and received wide praise and good reviews.

GTA III is commonly regarded as one of the best games of the saga of Grand Theft Auto games and one of the most revolutionary in history. The implementation of unique gameplay in a game with a premise so promising it achieved a great success in both sales and reviews, receiving very positive reception with scores for the PS2 version of:

The game won several awards, such as GameSpot's Console Game of the Year, Game of the Year from GameSpy and Cheat Code Central, and Best Action Game of 2001 by IGN. The game's average review score of 97% on Metacritic ties it with Tony Hawk's Pro Skater 3 for the highest ranked game in PlayStation 2 history. It was also inducted into GameSpot's Greatest Games of All Time list.

In 2009, Game Informer put GTA III 4th on their list of "The Top 200 Games of All Time", saying that it "changed the gaming landscape forever with its immersive open world sandbox".[5] GamesRadar named it 'the most important game of the decade'. The game was also ranked 4th in IGN's best video games and computer games of the decade 2000-2009. [6]

Following the success of GTA III, Destination Software Inc. and Crawfish Interactive developed a version of the game for Nintendo's handheld Game Boy Advance, which was canceled for unknown reasons. It was likely going to be very similar to what was later Grand Theft Auto Advance, but with the story of GTA III. 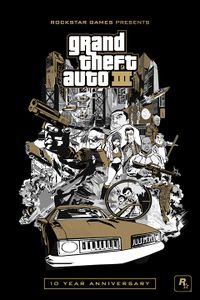 In October 2011, Rockstar Games announced[7] a 10th Anniversary Edition of Grand Theft Auto III would be released for mobile phones and tablets, including the iPad, iPhone and a selection of Android devices. The game was released on December 15, 2011. A week later, Rockstar announced updates which fixed some gameplay issues and also added support for more mobile phones. Support for further devices may still be announced.

Due to the technical limitations of mobile devices, a number of cosmetic features have been altered or removed from the game. However, the iPad version does not have these limitations.

Many lights do not show, including vehicle headlights, brake lights, lightbars on emergency vehicles, street lights and traffic lights. However, the game still operates as if these lights were correctly functional - so vehicles move over when a siren is sounding, and stop in turn for a red light that does not show.

In some PAL territories, Grand Theft Auto III was released with different cover artwork, despite there being no major differences in the game itself. Below are examples of several boxarts.

Retrieved from ‘https://www.grandtheftwiki.com/index.php?title=Grand_Theft_Auto_III&oldid=388225’
Categories:
Cookies help us deliver our services. By using our services, you agree to our use of cookies.