Grand Theft Auto 2, or GTA 2, is the second major installment in the Grand Theft Auto series. It was released worldwide on October 22, 1999, by developer Rockstar North (then known as DMA Design), for the PC and PlayStation. A version for the Dreamcast console was made available, and later a toned-down version for Game Boy Color. The game is also available for download for the PlayStation Portable.

The PC version of the game is now available for free download here, along with Grand Theft Auto 1, and another Rockstar game, Wild Metal: Reclaim the Future. However, this requires the registration to Rockstar Games' mailing list. Although it is not the original game, it has been remade to work on modern Windows operating systems.

GTA 2 is considered to be the only game in the GTA 2 era, as it is not directly related to any other GTA game.

Mock police records on the Grand Theft Auto 2 website are dated between 10 July, 2013 and 03 November, 2013[1]. This, along with the game's futuristic setting lead some fans to believe that the game takes place in 2013. However, the game's manual uses the phrase "three weeks into the future", and the website's clock is always set three weeks ahead of the current time[2] - this puts forward the idea that the game takes place in an unspecific time and place, fitting with the game's setting of "Anywhere, USA". On top of this, radio host Johnny Riccaro mentions in the game that "the millennium's coming," which would set the game shortly before 2000.

GTA 2 was the first title in the series to adopt early 3D graphics technology present on the PlayStation and some PCs. Whilst the gameplay did not shift to the third person perspective, as did Grand Theft Auto III with its full 3D environment, it utilised 3D graphics hardware/software to improve the visual quality.

GTA 2 gameplay was via the top down perspective, as in all GTA 1 titles/expansion packs, but due to the employment of early 3D tech, it exhibited smooth dynamic camera zooming, smooth sprite rotation, and lighting effects from street lamps, car headlamps and emergency vehicle roof lighting.'

There are some differences between GTA2 on each system, as the PlayStation 1 version is only available in the "noon" setting, which means it's only daytime, and features less lighting from explosions, streetlights and headlights, the Dreamcast version is only available in the "dusk" setting, which means that the environment is much dimmer, and the PC version has the option to play the game in either noon or dusk. These choices were made to exploit the particular technical qualities of each game system.

The PlayStation 1 version of Grand Theft Auto 2 is toned down from the PC version, with lower quotas for the number of kills needed in rampage style missions, and containing no voice acting in the saving interface. The port also includes a feature where the player car will explode after the player kills a large number of gang members. One mission was also changed. Instead of the player tricking civilians into entering a bus to drive them to a meat processing plant to be cannibalized, the victims are Hare Krishna gang members.

To save the game, the player needs to find the Jesus Saves church. It can only be found by listening out for the organ playing or by hijacking a TV Van (the antenna on top always points towards it). However, once at the church, the player needs to pay $50,000 to save, so it's best not to save until turning off the game. However, completing 2-3 missions will easily reward the player with enough money.

Each of the three gangs within the three districts have a gang that they are neutral with, and a gang that they are at war with. The player will earn respect by killing other 'enemy' gang members, but naturally, will lose respect with the gang that they are attacking - a gang with considerably low respect will attack the player if they enter their territory. Respect is also earned by doing missions for each of the gangs, and a high level of respect is required to unlock the harder, but more rewarding, missions. The player can find out which gang is hated by other gangs by going to the blue phone in each of the gang's territory. 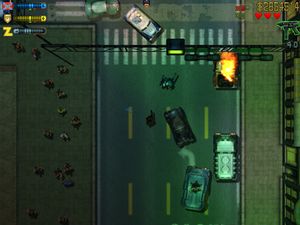 The police pursue the player in the PC version

After completing each level in the PC version, the player unlocks not only the next district, but also one bonus arena. There are two different types, each with 3 arenas; Destroying Ice Cream Vans, and a time-attack mode where the player must race against the clock (killing pedestrians and gang members earns the player more time).

In every city there are some "side" missions, most reward the player with an extra life or money, but the Wang Cars side mission rewards the player with 3 special vehicles. These missions are:

There are 8 gangs in the game:

GTA2 was the last PC GTA with built-in multiplayer with the exception of GTA IV. It supported up to 6 players and connections via internet, LAN, serial cable or direct modem connection. There are also three small multiplayer maps designed for smaller number of players, as well as 3 districts with modified locations of weapons and parked cars.

Playing via internet using only built-in tools is quite difficult. First you need to choose "tcp/ip connection", then enter server IP and you will be able to join only if host is in hosting menu. That's why programs like GTA2 Game Hunter, or GTA2 Gamer were made. They provide one-click joining without entering anybody's IP, chat and some other useful options which makes playing GTA 2 online as easy as any other modern game.

The live-action rendition of Claude Speed, played by Scott Maslen, from the opening cinematic of Grand Theft Auto 2.

The opening of the game was pieced together from live film-material that was taken from an 8 minute GTA 2 short-movie created for the purpose of advertising the game. This movie has since been made available to the public and is downloadable from the game's web-site.

Whether the movie can be considered canonical is debatable, as it shows Claude getting killed at the end (shot by a Zaibatsu hitman while trying to break into a sports car).

Despite the fact that GTA 2 is supposed to be set in the near future, the movie was clearly shot in present-day New York City, and also featured a blue-and-white NYPD Chevrolet Caprice police car as a pursuit vehicle. Claude Speed was played by Scott Maslen.

Retrieved from ‘https://www.grandtheftwiki.com/index.php?title=Grand_Theft_Auto_2&oldid=416774’
Categories:
Cookies help us deliver our services. By using our services, you agree to our use of cookies.