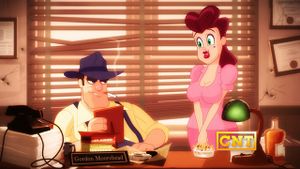 Gordon Moorehead and Molly Malmstein from the animated series.

The show was initially broadcast between the 1940s and 1950s on the Vice City Broadcasting System. The show has three main characters, detective Gordon Moorehead (also called George Moorehead), his assistant Molly Malmstein and their Hispanic companion Pablo, as well as the Chief, the police chief of the Vice City Police Department. The show makes a comeback in 1984, airing on VCPR in Grand Theft Auto: Vice City Stories. VCPR hosts Michelle Montanius and Jonathan Freeloader state that the show is returning after thirty-two years, suggesting the show was cancelled in 1952. Feminist Michaela Carapadis criticises the show, whilst the shows announcer (voiced by J.R. Horne) also seems disinterested in the show. He calls the shows protagonist Mooreland, George Moorecock and Jeremy Moorehead.

In the episode broadcast in Grand Theft Auto: Vice City Stories, entitled Gordon Moorehead and the Exploding Breasts, Moorehead and Malmstein search for the missing fisherman Pete Banbury, who they believe to be in the city's swamps. They locate his daughter, Lily, who Moorehead kills due to his fears that without a father she would become a prostitute, although her father later states she wanted to be a teacher. Moorehead and Malmstein meet the Chief, who is initially reluctant to allow them to continue their investigation but relents, stating that they can kill whoever they think is necessary. The two meet Pablo and split up, with Moorehead staying with Pablo whilst Malmstein goes through the swamp in search of Pete Banbury. She eventually locates him, informing him of his daughters death. Pete, distraught, begins to cry and Malmstein questions his masculinity and rips her t-shirt, calling out to Moorehead and Pablo. Moorehead then kills Pete with napalm, for organising a prostitution ring and holding back real estate. At the end of the episode, Malmstein's breasts explode.

Moorehead Rides Again appears as a viewable program on the CNT network. It is a sequel series to the radio serial, taking place in Los Santos towards the end of the Golden Era of Vinewood.

Retrieved from ‘https://www.grandtheftwiki.com/index.php?title=Gordon_Moorehead_Rides_Again&oldid=387906’
Categories:
Cookies help us deliver our services. By using our services, you agree to our use of cookies.