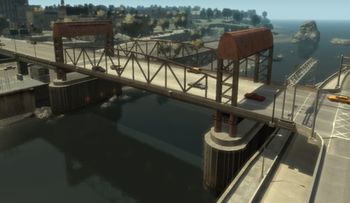 Hickey Bridge in GTA IV, looking towards Alderney from Algonquin.

The bridge is a continuation of Topaz Street in Algonquin and can also be accessed from exit ramps from the Union Drive West. At the Alderney end, the bridge leads straight into the Plumbers Skyway.

The name of the bridge implies that it's used as a potential make-out spot for couples.

Retrieved from ‘https://www.grandtheftwiki.com/index.php?title=Hickey_Bridge&oldid=360655’
Categories:
Cookies help us deliver our services. By using our services, you agree to our use of cookies.