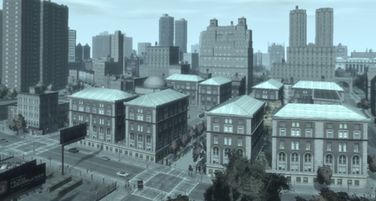 Varsity Heights, as viewed to the northeast from over Union Drive West.

Varsity Heights is a neighborhood in western Algonquin, Liberty City. It is bordered to the north by Topaz Street (North Holland); to the east by Frankfort Avenue (Middle Park); to the south by Quartz Street (Middle Park West); and to the west by the West River.

The layout of the neighborhood is virtually identical to Middle Park West: luxury high-rises apartments line the eastern border of the neighborhood along Frankfort Avenue, offering sweeping views of adjacent Middle Park. Townhouses and shops are the main stock in the central area, particularly along Galveston Avenue and the northern side of Silicon Street. Also in central Varsity Heights lies the aforementioned university's campus, spanning from Galveston Avenue to Ivy Drive South and Quartz Street to Silicon Street. Finally, west of Ivy Drive South to the West River is a public park, based on Riverside Park.

Given that Varsity Heights is generally residential, there are few places of interest to be mentioned in Varsity Heights. Aside from Vespucci University, there is an LCPD station is located at the intersection of Galveston Avenue and Silicon Street.

The area is made up mostly by Vespucci University, whose buildings resemble those of Columbia University, the Ivy League school located in the Morningside Heights section of New York City. Landmarks include a miniaturized Low Memorial Library and Butler Library. 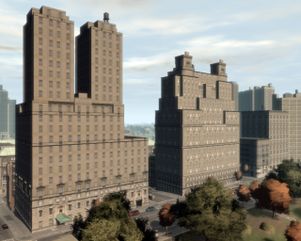 The skyline of Varsity Heights at the Frankfort Avenue end, fronting Middle Park.

Varsity Heights based off of the real life New York City neighborhood Morningside Heights, with Vespucci University obviously meant to replicate Columbia University. Ruby Street between Galveston Avenue and Ivy Drive South is a pedestrian-only pathway mainly used by students of the university to travel through the campus; it is directly influenced by the College Walk span of 116th Street.

The Liberty City Subway serves Varsity Heights at Quartz West. The station is located at the intersection of Quartz Street and Ivy Drive South, at the neighborhood's border with Middle Park West. This stop is located on the university campus, offering convenient access, and is just across the street from the park. The station is served at all times by the Algonquin Outer Line.

Retrieved from ‘https://www.grandtheftwiki.com/index.php?title=Varsity_Heights&oldid=399827’
Category:
Cookies help us deliver our services. By using our services, you agree to our use of cookies.