Let's Get Ready to Bumble 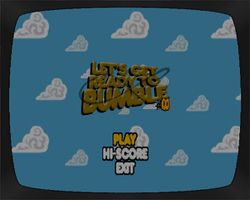 The menu of Let's Get Ready to Bumble in GTA San Andreas.

Let's Get Ready to Bumble is a 2-D game centered around collecting items. The player assumes the role of a bee that must attain a specific number of flowers attached to leafs (which translates to points in the form of honey) within an allocated time, all while avoiding thorny stems that will instantaneously kill the bee on contact; if the player depletes all three lives, the game is over. Movement of the bee is controlled by directional commands and a third command controls the bee's upwards thrust, while the leafs serve as platforms for the bee.

If the bee collects all the flowers, the player will move on to the next level, which will be predictably more difficult as the number of flowers to collect and the amount of thorny obstacles are increased.

Retrieved from ‘https://www.grandtheftwiki.com/index.php?title=Let%27s_Get_Ready_to_Bumble&oldid=373212’
Category:
Cookies help us deliver our services. By using our services, you agree to our use of cookies.