In GTA San Andreas, 24/7 stores are well spread all over San Andreas. While nearly all 24-7 outlets tend to bear distinctive exteriors, even disguising themselves under other store name (i.e. Roboi's Food Mart and the 69¢ Store), all 24/7 tend to share a common series of interiors, which feature combination of store shelves that cycle with each visitation; despite being common and featuring interiors, the stores has very limited interactivity as players can only purchase food or drinks from vending machines as well as play arcade cabinet-based video games. Unlike many fast food outlets in the game, 24/7 are not marked on the game's map or radar.

24/7 stores are also featured in GTA IV and GTA Chinatown Wars, but are not interactive. However, billboards advertising the store and its products can be seen, and its logo appears on some Steed (GTA IV) and Yankee (GTA Chinatown Wars) trucks.

Interactive 24/7 shops return in GTA V and GTA Online. Players can now enter and rob a number of stores across San Andreas, or purchase snacks to replenish their health. 24/7 shops are marked on the radar only in GTA Online. A couple of inaccessible shops with low-detail visible interiors can also be found in the state, mostly in Blaine County. 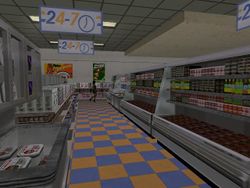 In GTA San Andreas, 24/7 stores use a total of three different interiors internally named "X7_11S", "X711S3" and "X7_11B". X7_11S and X7_11B, which are used for all but one 24/7 store, occupy a smaller area and features the aforementioned vending machines and arcade games. However, X711S3, which is linked to the west Mulholland, Los Santos outlet, features a moderately deep interior but has no vending machine or arcade cabinet, rendering that outlet useless in gameplay.

The interiors tend to feature a clerk manning the stores' counter, while two to four pedestrians (or customers) are usually found roaming the aisles, uttering unique shopping-related lines, as well as performing animated sequences where they retrieve items from store shelves and interacting with the player only if provoked. Customers may also interact with the store clerk in a short animation, but the customers never leave the store. The store shelves are also fairly detailed, featuring various branded products like Love Juice, Cherry Popper ice-cream or pizzas from Vice City.

Only two unique interiors are known to exist at this time. Both are staffed by clerks of East Asian origin. 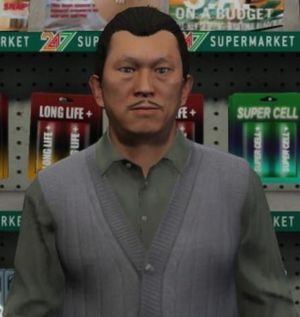 Retrieved from ‘https://www.grandtheftwiki.com/index.php?title=24/7&oldid=398789’
Categories:
Cookies help us deliver our services. By using our services, you agree to our use of cookies.