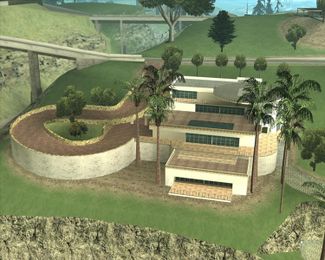 Madd Dogg's Mansion is a mansion in Grand Theft Auto: San Andreas, located in Mulholland, Los Santos, which becomes a save point for the player later during the game's storyline.

Initially the home of musician Madd Dogg (which Kendl Johnson claims is a place of sex and drugs), the mansion is a large two-story home with a terraced design, featuring wide spaces, a large number of rooms (the mansion is stated by Madd Dogg to have 19 bedrooms), lavish decors, and multiple facilities.

The mansion may have been inspired by MC Hammer's large former mansion in Northern California. It also has very similar decor to a mansion Ice-T displayed on MTV Cribs (Madd Dogg being voiced by Ice-T and likely a parody of him as well).

Besides serving as a save point (the save icon is located on the uppermost end of the mansion's interior), Madd Dogg's Mansion boasts a large variety of facilities, interactive or otherwise, upon completion of "A Home in the Hills".

The interior of the mansion features:

Outside, the mansion also sports a helipad where a Sparrow may spawn after reclamation of the mansion, and features a second outdoor swimming pool on the second terrace (where an oyster can be found); a Kart will also spawn at the lower entrance after "Cut Throat Business".

Despite featuring three garage doors, the player cannot save vehicles at the mansion, although a random vehicle will spawn in front of the garage doors. Also, there is no wardrobe found in the mansion.

Retrieved from ‘https://www.grandtheftwiki.com/index.php?title=Madd_Dogg%27s_Crib&oldid=368857’
Categories:
Cookies help us deliver our services. By using our services, you agree to our use of cookies.