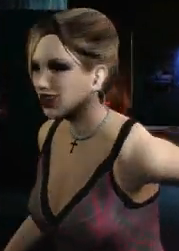 Monique is a woman in The Ballad of Gay Tony. She is the girlfriend of the club Bahama Mamas' owner, Vic Manzano.

Monique and Luis Fernando Lopez used to date, but it is implied that their relationship ended when he had an affair with her roommate. In the mission Boulevard Baby, Rocco Pelosi orders Gay Tony to send Luis down to Bahama Mamas where she is the manager, to "talk" (seduce) her to get her boyfriend Vic, who was in Las Venturas. Luis must dance with her; and then she begins kissing him, and leads him to the club's office, where she performs oral sex on him. Unfortunately Vic Manzano (who wasn't in Venturas) enters the office to find her head in Luis's lap. As she rises to explain the explicit scene, he punches her in the stomach and pulls a Pistol .44 on Luis. She can be killed during the mission, since after Vic is killed, she remains lying down on the floor and can be shot.