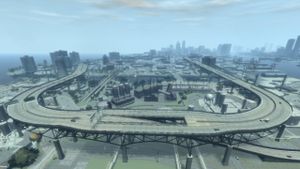 The Plumbers Skyway is the only major freeway in Alderney in Grand Theft Auto IV.

It is elevated at a great height from its Boyden Ave entrance to its western Acter portion. It nearly circles and encompasses southern Alderney. It begins immediately after the Hickey Bridge and circles Alderney, ending at the intersection of Asahara Rd and Boyden Avenue. Other than an intersection at Rand Avenue just after the Hickey Bridge, the Skyway has 5 exits and is the longest highway in the game.

It takes the shape of New Jersey's Pulaski Skyway from the Alderney City end up to Acter Industrial Park, and starts to take the shape of the New Jersey Turnpike in general once it reaches West Tudor and ends at the Rand Ave Intersection near the Hickey Bridge. Unlike the Pulaski Skyway, it serves more for amusement rather than functionality (as large ships cannot get past some smaller bridges blocking the waterway in Tudor) and it also allows for more buildings to occupy the area.

Traffic is very light heading to the Alderney City side, but heavy when entering Berchem and exiting Leftwood.

The Skyway includes a few construction zones where the barrier on the side of the freeway has been removed. It's possible to jump a bike or vehicle from these points, though at great risk of crashing.

No Exits or Entrances are numbered in the game, so they will be listed in order from where it begins after the Hickey Bridge, to where it ends at the intersection of Ashara Road and Boyden Avenue.

Retrieved from ‘https://www.grandtheftwiki.com/index.php?title=Plumbers_Skyway&oldid=369879’
Categories:
Cookies help us deliver our services. By using our services, you agree to our use of cookies.