Text Message Cars. I know you're all crazy, but are you crazy enough to take some cars?
- in-game website description

Car Thefts is a side mission in Grand Theft Auto IV involving the theft of 30 road vehicles for Stevie.

Stevie's Car Thefts is available after the player has opened up the Alderney Safehouse and completed Smackdown and No. 1. Niko Bellic will first receive a call from Brucie and, shortly afterwards, a text message from Brucie's friend Stevie. He needs some cars (30 total) that Niko will need to find across Liberty City and Alderney and deliver to S&M Auto Sales. It is similar to Brucie's Exotic Exports (email cars), except here the cars are parked and are not indicated on the map, and are never guarded by the owner, although one of the vehicles is parked in the compound of a police station and almost always has a cop standing nearby. The photo sent with the text message can often be used to help locate where the vehicle is parked, as Stevie's message isn't always specific as to the location, though he always indicates which neighbourhood it's in. In addition, Stevie pays much more for these cars when they're in good condition than Brucie does. Just like stealing any car, if police witness a car theft, the player receives a one star wanted level. Occasionally the cars have alarms, and some are unlocked.

If the player finds the right vehicle, the game shows a message saying: "You've found the vehicle Stevie is looking for." The player then needs to drive the car to Stevie's garage in Bohan; no message is given about this destination in-game but the garage appears on the map so it may be manually entered into the GPS.

The player can have the vehicles destroyed or keep the vehicles at the parking spaces, as the vehicle will be respawned at the original location as long as the vehicle is not delivered; in addition, the vehicles Stevie wants will only appear between the first contact with him to the last, and will not appear outside that time. There is no time limit for delivery of the vehicles, but Stevie will not request a new one until the current assignment is completed.

The condition of the vehicle determines how much money the player receives. Taking the car to a Pay 'n' Spray helps increase its value if the car is damaged. Note there is no Pay 'n' Spray in Bohan itself, so if a vehicle is damaged it needs to be taken elsewhere for repair; the closest Pay 'n' Spray to the garage is the one located in Northwood in northern Algonquin. Another way of repairing the vehicle is by parking the requested car in the "RESIDENTS PARKING" space next to the South Bohan Safehouse (or any other safehouse) then driving or running a block or two before returning (going inside the safehouse, saving the game, and then loading the saved game has the same effect).

Note: breaking a window to steal the vehicle is not considered damage for the purposes of the mission, so as long as the vehicle isn't damaged in any other way, it can be driven straight to the garage (which saves considerable time with the vehicles located in Bohan).

If a player wishes to complete these thefts quickly, it is recommended either that they save the game repeatedly at the nearby safehouse in Bohan, or repeatedly use a Pay 'n' Spray until they receive a text. These methods advance the time, which means Stevie will send a text in a matter of minutes after delivering a vehicle, instead of hours (Stevie follows up with a new assignment between 3 and 6 game hours after delivery). The player can view the amount of vehicles stolen under "Cars Sold to Stevie" in the Score section of the Stats in the pause menu.

The only incentive for storing most of the vehicles is their unique body colors, which are otherwise unavailable in other parts of the game; the vehicles are also otherwise similar in the range of accessories it may include; as is the case with the Rancher, Dukes and the DF8-90. However, it is a way of obtaining the otherwise very rare Infernus; although the vehicle will eventually need to be taken to Stevie's, it's possible that driving one may cause more Infernuses to spawn driving around; alternately the respawning glitch described earlier can be utilized to obtain a second gold-colored Infernus for ongoing use (one suggestion is to park the "cloned" Infernus outside the former Hove Beach safehouse, as its parking spot can still be used for vehicle storage), or collecting even more in order to cash in on later sales to Stevie one all 30 vehicles are delivered. Interestingly, the cars will not lose their unique colors even after resprays at Pay 'n' Spray, but motorbikes do lose their colors, which Stevie's garage might reject, in which case you'll have to retrieve another copy. Therefore, it is recommended that you carefully drive these bikes straight to the garage; all bikes start out at 100% condition anyway.

Once all 30 cars are delivered, the player can make some extra cash by bringing in any vehicle they want, at varying prices depending on model and condition, much like the original missions. In addition, these prices can reduce if the same model is regularly sold. Nonetheless, once this option is unlocked, money effectively no longer becomes a concern for the remainder of the game.

The player also earns the achievement/trophy You Got The Message for delivering all 30 vehicles. 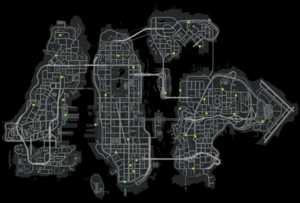 Map of the locations of cars posted by Stevie himself

A glitch may occur which causes the last car that the player delivers to Stevie to keep respawning in the same location no matter what. However, these will lose their special colors when resprayed.

Retrieved from ‘https://www.grandtheftwiki.com/index.php?title=Stevie%27s_Car_Thefts&oldid=398542’
Category:
Cookies help us deliver our services. By using our services, you agree to our use of cookies.