Base Jumps are a minigame in The Ballad of Gay Tony. The goal is to jump off designated locations with a parachute and land on targets. There are a total of 15 base jump locations around Liberty City. There are three types of jumps: target, vehicle, and heli jumps. The player is scored on how accurate is the landing and the time it takes to land. Money is rewarded for any tasks completed. Completing all base jumps will unlock the Gone Down achievement and a parachute inside of your safehouse. San Andreas also has base jumping but is only marked when at pilot school. 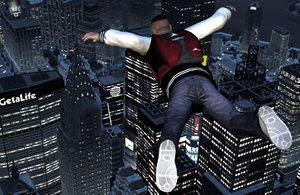 Base Jumps is a new minigame in The Ballad of Gay Tony. However, Grand Theft Auto: San Andreas was the first to have base jumping as an activity, but not as a minigame (in GTA:SA, CJ can visit the rooftops of the tallest buildings in Los Santos, San Fierro and Las Venturas where a parachute can be found and CJ can jump off the roof). In the TBOGT minigame, there are locations found throughout the city where the player can find. If they are located, they are specified in three types of base jumps. Note that the base jumps have different difficulties but mostly remain simple. Target Jumps are the most common, and probably the easiest. Vehicle jumps sometimes tend to be the hardest because the jump must be made on a moving target. The vehicle target is a slow moving Flatbed (except in one base jump where it is a Marquis boat). Players should also be aware that when in helicopter and you have a parachute, sometimes it may not appear and you will just fall. However this can be fixed by selected the parachute on the D-Pad and click RT. This spawns the parachute on Luis' back and is ready for use. Overall, base-jumping and skydiving are great ways to see Liberty City from great heights. Base Jumps are also available in Multiplayer.

Retrieved from ‘https://www.grandtheftwiki.com/index.php?title=Base_Jumps&oldid=379256’
Categories:
Cookies help us deliver our services. By using our services, you agree to our use of cookies.