You may be looking for the San Fierro mentioned in the HD Universe.

A detailed map of San Fierro.

San Fierro is the smallest metropolitan area in San Andreas, but the most urbanized, and is situated on a peninsula on the western part of the state. South of the city lies the massive Mount Chiliad and the Whetstone county. To the north of the city, across the Gant Bridge, a recreation of the famous Golden Gate Bridge, lies the town of Bayside. Northeast of the city lies the county of Tierra Robada. San Fierro is a moderately sized city with the beautiful San Fierro Bay to the north and The Panopticon to the east.

There is a sizeable country club complete with a golf course within San Fierro. San Fierro has a district marked by rainbow signs that is meant to emulate San Francisco's famous Castro District, home to a sizeable gay population.

The city bears visible scars of an earthquake, a likely reference to the Loma Prieta earthquake of 1989, three years before the game takes place, though dialogue suggests that an earthquake has occurred just recently. The most obvious sign of the intense damage is the crumbled section of freeway lying to the immediate west of Garver Bridge's San Fierro approach, which is an apparent emulation of the damage done to San Francisco's Embarcadero Freeway that is undergoing renovation, whose remnants could be seen for years after the earthquake. The freeway section does not seem to have any visible connection to the existing freeway, however. The city's infrastructure and buildings are not visibly damaged from the earthquake, the only such damage being in the Doherty area.

After escaping Los Santos with Kendl, Cesar meets with Carl. Cesar finds an available street race with the mysterious Wu Zi "Woozie" Mu. Carl races Catalina's "new boyfriend" Claude, for the ownership of a garage in San Fierro. Soon after, The Police discover The Truth's weed fields, and Carl flees to San Fierro with The Truth. 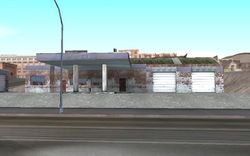 Once there, Carl finds that all is wrong. The garage he won from Catalina is derelict, and he discovers the disturbing truth about the Loco Syndicate, the crime organization responsible for the spread of drugs in Los Santos. The syndicate is run by leader de mysterio Michael "Mike" Toreno, a shady person with a surprising background. "T-Bone" Mendez, a San Fierro Rifa leader, serves as the muscle of the organization, along with Jizzy B., the biggest pimp in town, serving as concierge. As he is investigating the Loco Syndicate, Carl also discovers that Woozie is actually the head of a San Fierro Triad gang, the Mountain Cloud Boys, who are in the midst of a war with the Da Nang Boys, a Vietnamese crime organization.

After many odd jobs and errands for multiple bosses, Carl, Woozie and Cesar decide to take down the Loco Syndicate from the inside. Carl first pays Jizzy a visit, offering Jizzy his services. Jizzy gives Carl some work, during which he meets Mendez and Toreno. After being sure that Jizzy didn't suspect him, Carl confronts him at the Pleasure Domes nightclub. A massive shootout is followed by a high-speed car chase, in which Jizzy is killed by Carl. Then, he heads down to Pier 69, and kills Mendez and Carl's former friend Lance "Ryder" Wilson in a massive shootout between the Triads, the Rifa, the Ballas, Carl and Cesar. Finally, Woozie informs him that Toreno is getting ready to leave in a helicopter, and Carl shoots him down with a rocket launcher. He then destroys the syndicate's crack lab in Doherty, ending the Loco Syndicate once and for all.

Carl then receives a mysterious call from a "friend" who claims knowledge of Sweet's whereabouts, prompting him to head out to the desert, to find none other than Toreno. From there, a new chapter in the San Andreas storyline unfolds.

Simultaneously, Carl and Cesar also succeed in establishing their garage business in a successful vehicular chop-chop, which stores some of its "customer's wishlist" cars in a nearby showroom. For the most part, Kendl and Cesar decide to stay back in San Fierro, attracted to the city's gentle appeal, before joining Carl back in Los Santos after Kendl briefly joins him in Las Venturas. 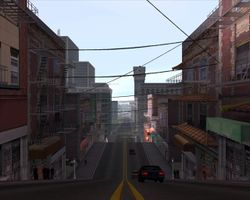 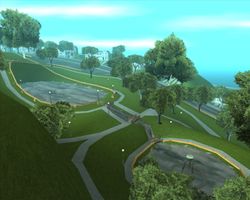 Many of San Fierro's districts are re-imaginings of real neighborhoods in San Francisco: 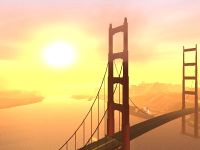 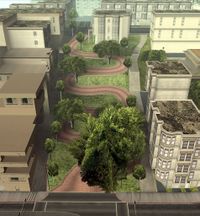 As with every other city in the GTA world, many landmarks in San Fierro are based on real life:

The cable car passing between the Calton Heights and Chinatown districts

Although cars are prominent, there are cable cars (trams) that circle San Fierro. No one is, however, unable to ride them, as they are literally unstoppable and will plow through any obstacle without incurring damage. The Brown Streak Railroad stops at Doherty's Cranberry Station across from the Doherty Garage. The Easter Bay Airport is located at the southeast of the city from the Garver Bridge approach.

San Fierro's atmosphere appears to be cooler than the rest of the state. The city commonly experiences rainstorms. These, combined with the frequent late-night and early-morning fog, can make driving and flying difficult because of reduced visibility. To further complicate the city's weather patterns, the Tierra Robada sandstorms occasionally blow into the northeastern parts of San Fierro, making flying near the Garver Bridge and Downtown skyline extremely treacherous.

Retrieved from ‘https://www.grandtheftwiki.com/index.php?title=San_Fierro&oldid=418139’
Categories:
Cookies help us deliver our services. By using our services, you agree to our use of cookies.